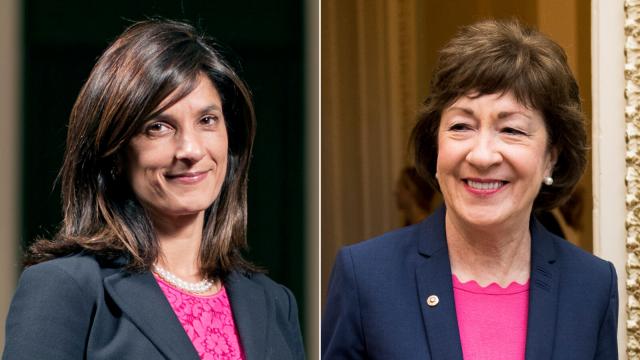 CNN — Republican Sen. Susan Collins delivered a dire message in her debate on Monday night, as she sought to remind Mainers of all that she's done for them with her power in Washington: "Don't buy the lies you see on TV."

The remark was an acknowledgment that her race has become the subject of national forces determined to defeat her and flip the Senate, with groups on both sides pouring in nearly $100 million for ads, according to Kantar's CMAG.

Since her first victory in 1996, Collins developed a Maine-centric, independent image, winning her last election with nearly 69% of the vote.

But her approval has fallen during the era of President Donald Trump, due in part to her support of the 2017 GOP tax plan and the confirmation of Judge Brett Kavanaugh to the Supreme Court. Recent polls show her behind in the race, as attack ads portray her as beholden to special interests.

Collins' race against state House speaker Sara Gideon has become a referendum on both the senator and President. The two candidates spent at least the first half of the debate on national issues, clashing over the future of the Supreme Court in the aftermath of Justice Ruth Bader Ginsburg's death and the US response to the coronavirus pandemic.

Within the first three minutes, Gideon charged that Collins has been in lockstep with the Republican Party's effort to turn the courts further to the right. And she warned that one week after Election Day, the Supreme Court would hear a case on the constitutionality of the Affordable Care Act, potentially taking health care away from millions of Americans.

"What we have to focus on is how we get back to a judiciary that is independent once again," she said.

Collins has inoculated herself from such attacks by becoming the rare Republican senator to oppose Trump's Supreme Court nominee, Judge Amy Coney Barrett, arguing that the selection came too close to the presidential election. In 2016, the Senate had 237 days to consider and confirm President Barack Obama's nominee to replace the late conservative Justice Antonin Scalia, Judge Merrick Garland, before Election Day. The Senate now has only 35 days, but unlike four years ago, almost all Republicans are now willing to confirm the nominee.

Collins also criticized Gideon for not outright rejecting the push from Democrats to expand the court should Republicans put Barrett on it, which would give conservatives a 6-3 majority.

"I think one of the worst ideas for trying to make the Supreme Court less political is to pack the court," Collins said.

But Collins' opposition to Barrett could hurt her with conservatives and not be enough to assuage the concerns of her former supporters. While a Supreme Court vacancy helped Trump win election in 2016, the current one appears to energize liberals. Small-dollar donors have given more than $300 million through the online fundraising platform ActBlue since Ginsburg's death, according to a spokesperson on Monday.

The two major party candidates also traded attacks on the US response to the pandemic, which has claimed the lives of over 200,000 Americans.

While Gideon blamed Collins for Congress not passing additional legislation to address the health care and economic crisis in over four months, Collins blamed Gideon for the state legislature adjourning in March. Gideon responded that Maine has one of the lowest number of cases in the country, and said Collins was deflecting from the issue since the state government is awaiting help from the federal government.

"Imagine if we had actually taken this virus seriously from the very beginning," she said.

Collins retorted that Congress has already passed trillions of dollars of relief for Americans, and that she helped write the bill that created the Paycheck Protection Program to aid small businesses. "Sara may have missed it," said Collins.

The senator said she supported additional legislation to extend the PPP program, and provide aid to schools, increase testing and prevent layoffs of firefighters and other public workers. Collins also said she wants a "reasonable supplement" for the unemployed.

If Democratic Sen. Doug Jones loses in deep red Alabama, Democrats need to win four seats and the White House to take control of the chamber. Some Democrats believe that Collins could provide that fourth victory. A New York Times/Siena College poll from mid-September showed Gideon leading her by five points.

Collins is the one of the few Republican moderates left in the Senate, and the last Republican in Congress in New England. She took on her party in opposing the repeal of the Affordable Care Act in 2017, and expressed on Monday how her seniority and position on the Senate Appropriations Committee has led to victories for Maine, including rail, waterfront and shipping projects.

But some of her votes in the past few years, and Trump's standing in the state, has hurt her. Trump lost Maine in 2016 by three points and appears to be faring much worse there in 2020. Democratic presidential candidate Joe Biden leads Trump there 55% to 38%, according to the Times poll.

One of the most notable moments came at the beginning of the debate came when independent candidate Max Linn tore up a few face masks at his podium in protest of government mandates to wear them for public safety. He was frequently antagonistic, goading Collins and Gideon to look at him and attack him, while calling them pawns for Senate Majority Leader Mitch McConnell and Senate Democratic Leader Chuck Schumer.

Both major party candidates deftly handled him. Collins urged viewers to have fun with their masks to promote causes; she said hers said "eat Maine potatoes." After Linn said that Collins and Gideon gave "bulls***" responses, and urged Gideon to "woman up" and direct a response to him, the state speaker responded, "Thank you very much for that opportunity."

"The only request I have is actually that we do not allow people to swear on the stage because I do know that there are many children watching our debate today," added Gideon.