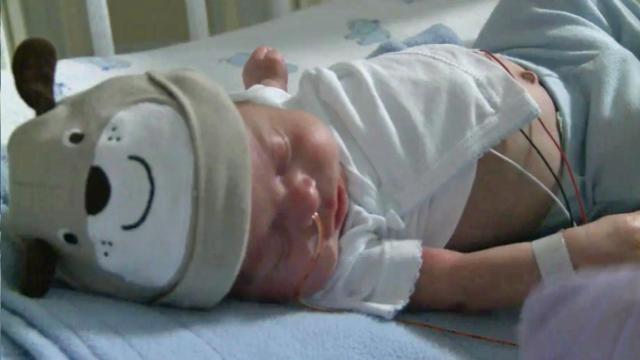 Jean-Paul and Lisa Dame gave up on having a baby after years of trying with medical assistance.

“You know, they say when you stop trying, you know, it happens and so that's when we had Gabby,” Jean-Paul Dame said.

The Raleigh couple conceived their daughter naturally and everything was going well until preeclampsia – high blood pressure during pregnancy – forced Gabby to be delivered at 25 weeks.

She weighed just over a pound.

About 12 percent of mothers across the country have preterm births. North Carolina is at 13 percent.

“I think we're seeing lots more babies that are smaller than ever before,” said Dr. Martin McCaffrey, director of the Perinatal Quality Collaborative of North Carolina (PQCNC).

The collaborative is a statewide conference of medical professionals from 65 hospitals with the goal of improving care for both mothers in high-risk pregnancies and their babies who end up in neonatal intensive care units.

Babies in neonatal units require central lines, which put them at higher risk for infection.

That risk became real for the Dames, as Gabby's health suddenly declined due to what was later diagnosed as a MRSA infection.

After her death, Gabby became the face of the group’s mission to prevent infection. The collaborative has promoted higher standards for infection control across the state, such as hand washing, better checks and balances among hospital staff and more family involvement.

“We have had outstanding results,” McCaffrey said. “In the infection project we have seen a reduction in the infection of central lines of 71 percent.”

The Dames are thankful their loss turned into something positive.

“I'm very happy with the return and the momentum that we've been able to start,” Jean-Paul Dame said.