Colin Powell touts Biden's character at DNC: 'We need to restore those values to the White House' 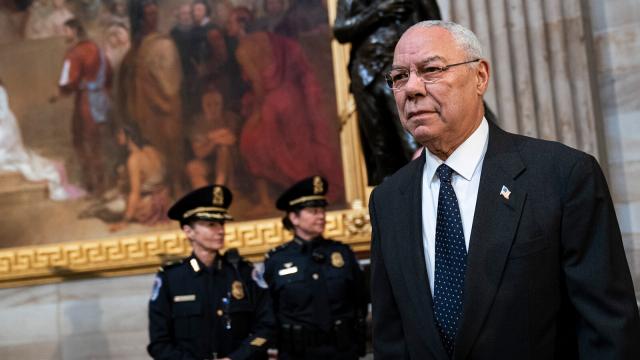 CNN — Former Secretary of State Colin Powell on Tuesday lent another Republican voice in support of Joe Biden in an unannounced video recorded for the Democratic National Convention as the Democrats attempt to appeal to more centrist voters.

Powell, who served in President George W. Bush's administration, is one of several Republicans featured at the Democratic convention this year. Former Ohio Gov. John Kasich and other top Republicans spoke on Monday night, making the case that Biden is the best candidate to win over moderate Republicans.

"The values I learned growing up in the South Bronx and serving in uniform were the same values that Joe Biden's parents instilled in him in Scranton, Pennsylvania. I support Joe Biden for the presidency of the United States because those values still define him, and we need to restore those values to the White House," Powell said in a video released by the Democratic National Convention Committee ahead of the second night of convention programming.

"Our country needs a commander in chief who takes care of our troops in the same way he would his own family. For Joe Biden, that doesn't need teaching. It comes from the experience he shares with millions of military families sending his beloved son off to war and praying to God he would come home safe," Powell said.

The 2020 election is the fourth straight presidential election that Powell has backed the Democratic presidential nominee over the Republican. He supported Barack Obama in 2008 and 2012, and he endorsed Hillary Clinton in 2016.

The last time Powell supported a Republican was 16 years ago, when he supported George W. Bush for president in 2004. In 2000, Powell gave the keynote address at the Republican National Convention in support of Bush.

Powell was floated as a Republican presidential candidate himself in 1996 but declined to run. He served as Bush's secretary of state from 2001 to 2005, and was the first African American to hold that job. Previously, from 1989 to 1993, Powell served as the chairman of the Joint Chiefs of Staff. He was the youngest person and first African American to serve in that role.

Earlier on Tuesday, the Democratic National Convention Committee previewed a video detailing what it described as the "unlikely friendship" between Biden and another Republican -- the late Sen. John McCain of Arizona.

The video was played near the end of the convention programming on Tuesday night, an official said, to expound upon Biden's character and his leadership around the world. It is designed to draw a strong contrast with President Donald Trump -- and perhaps trigger a response from him as well, the official said.

Cindy McCain tweeted that she was pleased to take part in the video. Her voice will be heard in part of the presentation, but she will not narrate the eight-minute video.

Powell told CNN's Jake Tapper in June that he would be voting for Biden, saying, "I certainly cannot in any way support President Trump this year."

Powell told Tapper that he is "very close to Joe Biden on a social matter and on a political matter," and said, "I worked with him for 35, 40 years, and he is now the candidate and I will be voting for him."