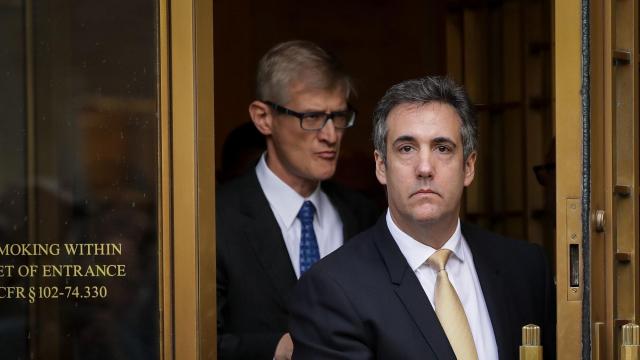 Cohen had previously said talks about the Moscow project had ended in January 2016 just prior to the Iowa caucuses.

Cohen waived his right to an indictment when he appeared in a New York federal court.

"In truth and in fact, and as Cohen well knew, Cohen's representations about the Moscow Project he made to (House and Senate intelligence committees) were false and misleading," Mueller's office said in a court filing.

"Cohen made the false statements to ... give the false impression that the Moscow Project ended before 'the Iowa caucus and....the very first primary,' in hopes of limiting the ongoing Russia investigations," the filing adds.

"He was convicted with a fairly long-term sentence with things unrelated to the Trump Organization," Trump said, citing Cohen's legal issues with mortgages and the IRS.

"What he's trying to do is get a reduced sentence," Trump said.

The charge to which Cohen pleaded carries a maximum sentence of five years in prison, a maximum fine of $250,000 and supervised release of not more than three years. Sentencing has been set for December 12.

Cohen left the courthouse without making a statement.