Durham, N.C. — Cocoa Cinnamon's third location is the culmination of seven years of hard work that started with the owners peddling a coffee bike around town.

Areli and Leon Grodski de Barrera started their business as bikeCoffee, a mobile coffee shop that was a staple at many food truck rodeos. Now that bike sits in Cocoa Cinnamon's third location at 2013 Chapel Hill Road.

The couple first trademarked the name, Cocoa Cinnamon, in December 2010. They had no idea that their desire to build a business would be embraced by the Durham community. Leon Grodski de Barrera said that the support has included everything from loans to people chipping in to help with construction needs at each of their locations. 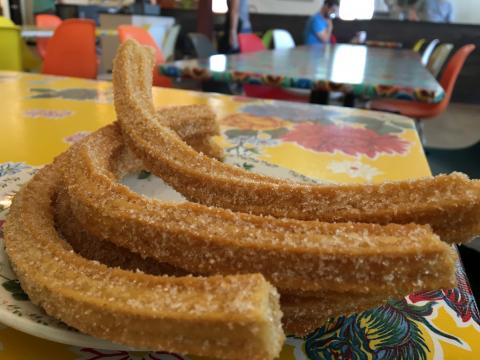 The third location features freshly made churros. Areli Grodski de Barrera said she wanted to make sure they were authentic, like the ones she grew up eating in Mexico. With a crispy outside topped with just the right amount of cinnamon and sugar, Cocoa Cinnamon's churros are perfect for dipping in warm chocolate or coffee. They can also be served without the sugar.

The couple modeled the new location after some of the restaurants and vendors they saw while in Mexico visiting family. The shop's decor reflects the spirit of those restaurants and shops with brightly colored chairs, vibrant art work and multicolored flowered table cloths.

The third location also boasts blended drinks and will house a micro-roastery that will be roasting beans for all three shops. The roasting operation is being dubbed 4th Dimension Coffee. 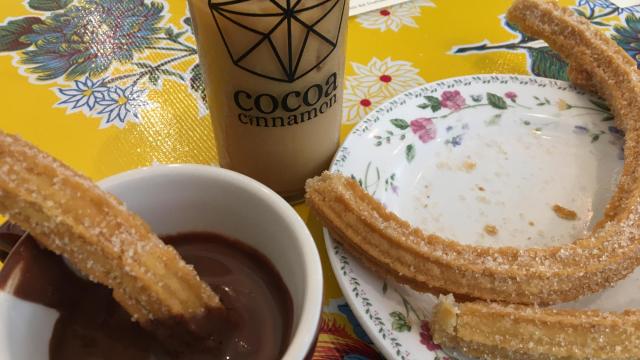