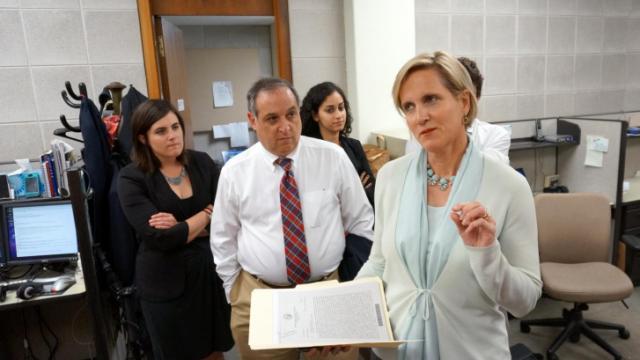 Raleigh, N.C. — The General Assembly will not pass a bill governing the clean up of 33 coal ash pits at 14 locations across North Carolina after House and Senate negotiators failed to reach a consensus late Thursday night and early Friday morning.

Senators ended their work for the summer session shortly after 1 a.m. Friday. They will come back in two weeks to deal with any gubernatorial vetoes and then leave town until November, according to an adjournment resolution awaiting House approval. House members won't complete their work until Saturday, but without the Senate, they cannot pass legislation on their own.

"Up until about eight hours ago, I thought we could reach an agreement," Sen. Tom Apodaca, R-Henderson, said early Friday. "Then things took an odd turn ... and I'm just going to leave it at that."

Coal ash became a front and center policy issue for the state after a Feb. 2 spill that sent more than 40,000 tons of the toxin-laced goop into the Dan River near Eden, in Rockingham County. The ash is what's left over after coal is burned for fuel and contains mercury, lead, arsenic and other elements poisonous to humans.

In the wake of the spill, lawmakers vowed to craft a bill that would prod Duke Energy to clean up the unlined coal ash pits at 14 current and former power plants around the state, with both House and Senate leaders naming the cleanup a top priority.

Leaving the bill unfinished could be particularly stinging for Senate President Pro Tem Phil Berger, who lives near the site of the Dan River spill.

"If you have something that is your highest priority, it doesn't mean you just do anything," Berger said. "It means you try to get it right and you do everything you can to get it as right as you can get it."

Deal or no deal

The coal ash bill was the first substantive piece of legislation filed by the Senate during the short session, and all indications were the measure was on a legislative fast track. Early on, it looked like senators would call for more stringent provisions than either the governor or House. Senate provisions called for stricter time lines, would have appointed an independent board to oversee the cleanup and gave Duke little flexibility in meeting its timetables.

A version of the bill subsequently passed by the House gave the company more flexibility. For example, while both versions of the bill would allow the oversight board to determine how quickly a location needed to be cleaned up, the House gave the Department of Environment and Natural Resources the ability to push back deadlines.

Environmental advocates said both versions fell short of what was needed. Both versions of the bill would undercut current court proceedings aimed at forcing Duke to cleanup the pits with or without new legislation.

While the bill would require Duke to clean up four high-priority sites, it would leave "most citizens and communities living near and downstream of coal ash pits with no assurance that the coal ash threatening their drinking water and waterways will be removed or safely stored," according to a letter to lawmakers from the Southern Environmental Law Center.

A spokesman for the Sierra Club declined to comment on the breakdown in negotiations early Friday morning.

“The bill on the floor only undermined current law and 'greenwashed' Duke's longstanding plans to cover its coal ash with a tarp and walk away," said D.J. Gerken, a senior attorney with the Southern Environmental Law Center. "The legislature needs to come back in November and deliver on the promises made to North Carolina's families to require real cleanup of coal ash."

For its part, lobbyists for Duke have been on the periphery of House-Senate negotiations, according to a company spokesman.

"We continue to follow developments related to the proposed coal ash bill to determine potential impacts to our operations," spokesman Jeff Brooks said in the hours before the deal fell apart. "We have provided technical information and answered questions as requested by legislators."

At the start of this week, lawmakers in both the House and Senate seemed optimistic they could reach a compromise. But as Thursday afternoon wound into evening, something went wrong.

Senate leaders said they believed they had a deal with the House and had signed a conference report, the document needed to resolve the differences and pass a final bill.

"We did not refuse to sign it," she emphatically told reporters Thursday evening.

However, senators produced the conference report in question with the signatures of the three Senate conferees on it: Berger, Apodaca and Sen. Trudy Wade, R-Guilford. As well, one of four House conferees had signed the measure: Rep. Mike Hager, R-Rutherford.

As the night wore on, Samuelson delivered the House's own conference proposal, which Apodaca rejected out of hand.

While they may not agree on the sequence of negotiations, both House and Senate members agree that one specific provision caused the breakdown of negotiations.

Neither the House bill nor the Senate bill defined a "low-risk" coal ash pond, one of three risk levels created in the bill. High-risk ponds would have to be cleaned up right away, while Duke would have greater flexibility in cleaning up medium- and low-risk ponds.

House negotiators wanted to insert a provision into the final bill that said no pond could be low risk if it was close to surface waters such as streams and lakes. Senators objected to the provision, saying they didn't know what the consequence would be.

"It was something our staff couldn't tell us what the real consequence of the provision was," Berger said, accusing accused Samuelson and fellow House conferees Reps. Chuck McGrady, R-Henderson, and Rick Glazier, D-Cumberland, of "going rogue."

During the afternoon, McGrady declined to specify differences between the House and Senate, but he took to Twitter in the evening to accuse senators of not being straightforward about the negotiations. After Senators pulled the bill from their calendar, he used Twitter to say he was "very surprised" there wouldn't be a coal ash bill but that the situation was "better than a weak bill."

It now appears this issue will be waiting for lawmakers when they return to work after the November general election.