CNN sued the Trump administration on Tuesday in an effort to reinstate the press credentials of its chief White House correspondent, Jim Acosta, escalating a dispute that has highlighted the increasingly tense dynamic between President Donald Trump and the media.

In a lawsuit filed in U.S. District Court, the network argued that the removal of Acosta’s White House press pass constituted a violation of his First Amendment rights to freely report on the government. CNN also asserted that the administration had violated Acosta’s due process rights guaranteed by the Fifth Amendment when it revoked his credentials without warning.

Acosta, who has frequently clashed with Trump, angered the president at a formal news conference last week with questions about immigration and the special counsel’s investigation. The CNN correspondent would not give up the microphone after Trump tried to move onto another reporter.

Hours later, the press secretary, Sarah Huckabee Sanders, announced that the administration had removed Acosta’s credentials, which allowed him access to the White House grounds. The administration falsely claimed that Acosta had placed his hands on a White House intern who had tried to take his microphone away during the news conference.

“While the suit is specific to CNN and Acosta, this could have happened to anyone,” CNN said in a statement. “If left unchallenged, the actions of the White House would create a dangerous chilling effect for any journalist who covers our elected officials.”

A hearing on the lawsuit was set for Wednesday at 3:30 p.m. Eastern time. The judge in the case is Timothy J. Kelly, who was nominated last year by Trump and then approved by the Senate.

Shortly after the lawsuit was filed, the White House responded with a statement. “This is just more grandstanding from CNN, and we will vigorously defend against this lawsuit,” Sanders wrote, noting that dozens of other CNN journalists have retained their White House credentials. 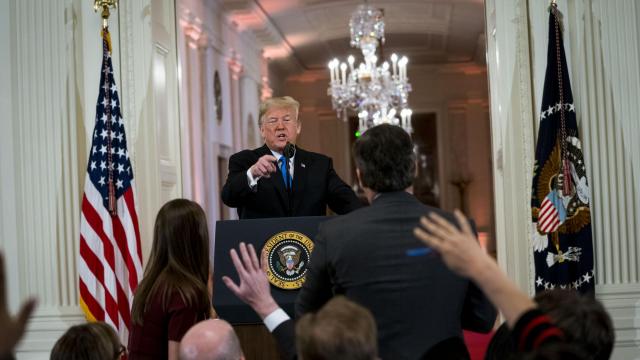 Sanders made no mention of her original claim that Acosta had reacted inappropriately with the intern. Instead, she wrote that “he physically refused to surrender a White House microphone to an intern, so that other reporters might ask their questions.”

“The White House cannot run an orderly and fair press conference when a reporter acts this way, which is neither appropriate nor professional,” she added.

In turning to the courts, CNN has taken perhaps the most aggressive action yet by a news organization against a president.

Trump has vilified the press since he started running for office in 2015. His denigration of the media as “the enemy of the American people” — and his popularization of “fake news” as a way to dismiss critical coverage — has alarmed press freedom groups around the world.

Supporters of Trump, though, are likely to seize on the lawsuit as evidence for the president’s claim that news organizations, especially CNN, are biased against him. “CNN sucks!” has been a frequent chant at Trump’s rallies. Reporter Bob Woodward, speaking in Florida on Tuesday, said that a lawsuit may play into Trump’s hands.

“I think Trump would sit around and look at this and say, ‘This is great,'” Woodward said onstage at the Global Financial Leadership Conference. “Nixon effectively made the conduct of the media the issue, rather than his conduct. Trump has adopted that strategy, he’s refined it. It’s very effective, and so when we engage in it, we’re taking his bait, in my view.”

Floyd Abrams, the noted First Amendment lawyer, said in an interview on Tuesday that CNN’s legal action was necessary, even as he acknowledged the potential political fallout.

“I can understand the reluctance — at a time when the president is saying, ‘CNN is hostile to me’ — for a lawsuit to be filed with the caption ‘CNN v. Donald Trump,'” Abrams said. “That said, sometimes a strong response is necessary, both for the institution itself and for the broader cause for which it effectively speaks.” Acosta, who has a reputation as a showboat among some of his press corps colleagues, is not the first White House reporter to aggressively question a president in public. One of his predecessors, ABC correspondent Sam Donaldson, said in a memo filed with CNN’s lawsuit that he knew of no precedent for a journalist’s credentials being withdrawn and “never would have imagined such action was possible.”

Still, rival networks have not issued formal statements in support of CNN or Acosta. The White House Correspondents’ Association on Tuesday criticized the removal of Acosta’s credential but did not address the lawsuit itself.

“Revoking access to the White House complex amounted to disproportionate reaction to the events of last Wednesday,” the group’s president, Olivier Knox of SiriusXM radio, wrote. “The president of the United States should not be in the business of arbitrarily picking the men and women who cover him.”

CNN’s argument for restoring Acosta’s credential resembles a lawsuit in 1977 that involved Robert Sherrill, then a correspondent for The Nation magazine who was denied a White House press pass. A court ruled that the Secret Service had to follow a clear process, including prior written notice, before revoking a journalist’s credentials, a precedent cited on Tuesday by CNN’s legal team.

Andrew Napolitano, a former Superior Court judge in New Jersey and sometime Trump confidant, said on Tuesday that he expected CNN to prevail. “Obviously, Acosta may have been an irritant to the president, but he was hardly a danger to him,” Napolitano said on the Fox Business Network. “CNN’s got a very good case. I think this will be resolved quickly. I don’t expect a jury trial.”

Sanders is named as a defendant in the suit, along with Trump; his chief of staff, John Kelly; the head of White House communications strategy, Bill Shine; and the Secret Service. The lawsuit states that Jeff Zucker, CNN’s president, personally wrote to Kelly last Thursday asking for Acosta’s press pass to be reinstated. Zucker also accused the administration of a “pattern of targeted harassment” against journalists from CNN.

CNN also said in the suit that Acosta was prevented from covering parts of Trump’s weekend trip to Paris, and that his request last Thursday for a temporary day pass to the White House was rejected.

CNN’s corporate parent, AT&T, remains embroiled in its own legal battle with the administration.

The Justice Department filed a federal appeal in July to unravel AT&T’s merger with Time Warner, which owns CNN. Arguments in that case are scheduled to be heard on Dec. 6. The government had tried to block the deal before it was approved by a federal judge in June.

The law firm Gibson, Dunn & Crutcher is representing CNN in the Acosta lawsuit. The legal team includes Theodore B. Olson, who served as solicitor general under former President George W. Bush. Trump previously tried to hire Olson for his own legal team, without success.