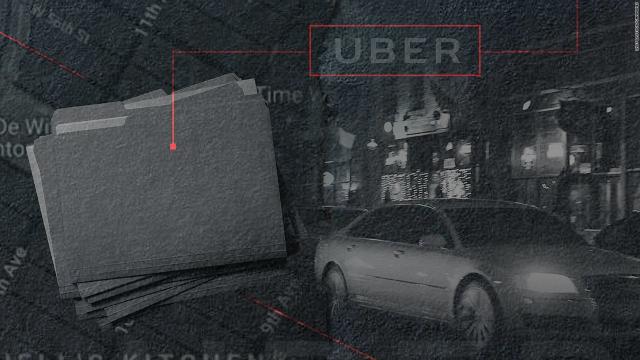 NEW YORK (CNNMoney) — After an evening of cocktails in San Diego, a woman got into the back of an Uber for a ride home. She was so intoxicated she had to ask the driver to stop so she could vomit. She says she then passed out in the backseat.

When she regained consciousness, the Uber driver was on top of her, raping her, a block from her home, according to the police report and two sources familiar with the investigation.

In November, Sanchez was sentenced to 80 years in prison for the rape of the Uber passenger and 33 other counts against him, including sexual assaults of at least nine other women and children. Sanchez drugged many of his victims.

A CNN investigation has found that Sanchez is just one of at least 103 Uber drivers in the U.S. who have been accused of sexually assaulting or abusing their passengers in the past four years. The drivers were arrested, are wanted by police, or have been named in civil suits related to the incidents. At least 31 drivers have been convicted for crimes ranging from forcible touching and false imprisonment to rape, and dozens of criminal and civil cases are pending, CNN found.

There is no publicly available data for the number of sexual assaults by Uber drivers or for drivers of other rideshare companies. CNN's analysis comes from an in-depth review of police reports, federal court records and county court databases for 20 major U.S. cities.

In another case examined by CNN, a woman from Miami left her kids with their grandmother and went to a bar with a friend. She took an Uber home. She says she passed out along the way and woke up the next morning with her pants and underwear on the floor.

The Uber driver allegedly carried her into her apartment, threw her onto the bed and sexually assaulted her. She is a plaintiff in a proposed class action lawsuit against Uber.

"You are pretty much hitchhiking with strangers," she told CNN. "How many people is it going to take to get assaulted before something is done?"

According to police, the driver told them he knew the victim had been drinking and was "wrong for what he did." He pleaded not guilty for sexual battery and awaits trial.

A woman in Long Beach, California, who alleges she fell asleep intoxicated in the back of an Uber in 2016, told CNN that she woke up with the driver assaulting her. The driver, 47, was found the next day with her phone and later arrested. He claimed the sex was consensual and the district attorney dropped the criminal case against him. She is suing Uber over the incident and for representing its services as "safe."

Uber: 'We want to be part of the solution'

Uber, which launched in 2010 in San Francisco as "everyone's private driver," is the most valuable privately-held tech startup in the world. It is valued at $70 billion and operates in 630 cities worldwide. Uber provides 15 million rides a day.

The issue of sexual assault conflicts with Uber's brand messaging to provide a "safe ride home." Its print and digital ads show women taking Ubers for nights out, and a partnership with Mothers Against Drunk Driving includes a "designated rider" campaign urging users to take an Uber to avoid driving under the influence. In 2015, Uber set up a popup kiosk in Toronto to offer free rides to those who blew into breathalyzers.

This is significant given many of the women raped or attacked by the 103 accused drivers uncovered as a part of CNN's investigation had been drinking, or were inebriated, at the time of the incidents.

The majority of the police reports reviewed by CNN involved incidents that took place in or near major cities across the country. Uber did not provide numbers on how many of its drivers have been accused of sexual assaults.

Five drivers across various states told CNN they were not provided any kind of sexual harassment or assault training. Drivers agree to the company's community guidelines when they sign up to work for the service. Uber said it updated its standards in December 2016 to specify no sexual contact is permitted when using its platform.

Last week, the company posted a sexual assault prevention video on its website to inform drivers and riders "how to create a safer community." It also said it plans to host 50 community forums nationwide for advocates, leaders, drivers and riders across to talk about the issue. The changes came after CNN first contacted Uber about this story.

Uber was made aware of CNN's reporting for this story months ago but the company failed to make any executives available to speak on the record. It canceled an on-camera interview with an Uber executive earlier this month.

On a call with CNN last week for an unrelated story, Uber CEO Dara Khosrowshahi said cracking down on sexual assault is a "new priority for us."

"It is a priority that I expect to remain a priority for the foreseeable future," said Khosrowshahi, who joined the company in late August after cofounder Travis Kalanick stepped down.

In a recent statement sent to CNN, an Uber spokesperson said safety is the company's top priority this year and cited recent protocol updates such as rerunning driver background checks on an annual basis moving forward. The company also said it plans to roll out a dedicated "safety center" within the Uber app where riders can designate contacts they want to share trip details with while they ride; it will also have an emergency button allowing users to call 911 from inside the app.

"This is just a start and we are committed to doing more," the spokesperson said. "Sexual assault is a horrible crime that has no place anywhere. While Uber is not immune to this societal issue, we want to be part of the solution to end this violence forever."

Lyft, an Uber competitor that provides one million rides daily in the United States and Canada, is also dealing with sexual assaults by its drivers. A similar CNN review using the same methodology found 18 cases of Lyft drivers accused in the past four years. Four drivers have been convicted.

"The safety of the Lyft community is our top priority," said a Lyft spokesperson, adding it has "worked hard to design policies and features that protect our community."

It's common for Uber and Lyft drivers to work for both services. But each company performs its own background checks. Both companies mostly conduct digital background checks via a startup called Checkr.

Uber said it reviews the records of driver candidates that are surfaced to the company by its background check provider. It said any serious criminal convictions, like sexual assault, sex crimes against children and kidnapping, would disqualify candidates.

The company previously didn't have a uniform policy on rerunning criminal background checks. But when pressed by CNN, a spokesperson said in January it started running screenings on drivers every two years in mid-2017. In addition to its recent announcement about annual background checks on drivers, Uber plans to monitor new criminal offenses (via public records or pending DUI charges) as they happen.

CNN found two instances in which drivers pleaded guilty to sexual assaults while working for both Uber and Lyft.

In one case, a Seattle driver began driving for Lyft after Uber discharged him, according to court documents. He later sexually assaulted a Lyft rider. In the other case, a driver pleaded guilty in San Diego to indecent exposure and the false imprisonment of an Uber passenger, as well as battery for a separate incident involving a Lyft passenger.

Of the 103 Uber drivers accused of sexual assault or abuse, for 18 of them, criminal cases did not move forward either because charges were dropped, cases were dismissed, or drivers were found not guilty.

The district attorneys and police officers who spoke to CNN said cases don't move forward for several reasons, such as lacking a probable cause or witness cooperation.

CNN did not include most of these complaints in its tally of cases, because they could not all be verified with incident reports.

However, the numbers suggest that there may be many more overall incidents of sexual assault than the 103 cases found in the CNN investigation.

Since 2016, the Los Angeles Police Department has received at least 13 similar complaints about Uber drivers, eight regarding Lyft drivers and more than a dozen about ride-share drivers whose companies were unclear in data shared with CNN. Only one of those cases led to an arrest.

In Austin, police have documented at least 16 sexual assault complaints about Uber drivers -- and at least ten about Lyft drivers -- since 2015.

Meanwhile, the Denver police department has recorded at least nine sexual assault or abuse complaints about Uber drivers and at least 12 about Lyft drivers since 2015, but only two of those complaints resulted in criminal charges. Most of the other Denver cases became inactive due to lack of witness cooperation or were refused by the district attorney for lack of evidence.

Lawyer: Uber has been 'keeping this story quiet'

Jeanne Christensen, an attorney with law firm Wigdor LLP, has been pursuing Uber rape and assault cases since 2015 when her firm filed a lawsuit after a high-profile rape case in New Delhi. The Uber driver, who had a previous record that included rape and molestation, was sentenced to life in prison. The incident sparked protests and caused authorities to temporarily ban Uber from the city for six weeks.

That case, and questions about how Uber handled it, thrust the issue into the spotlight.

Most recently, Christensen's firm represents a proposed class action against Uber on behalf of nine plaintiffs, including the Miami woman CNN interviewed, who said they were assaulted by Uber drivers.

Uber is trying to compel the women to carry out their case through arbitration per its legal terms of service. When users sign up for Uber, they agree to its terms, which includes resolving any claim "on an individual basis in arbitration."

Christensen and the women are pushing back. In a letter to Uber's board, 14 women detailed their experiences and urged the company to remove its arbitration clause, saying it silences them and forces the issue underground.

"We trusted a company operating in the space of transportation for hire to mean what it says, and we never thought that Uber would perpetuate physical violence against women," they wrote.

An Uber spokesperson previously issued a statement to CNN about forcing the case into arbitration, calling it the "appropriate venue for this case because it allows the plaintiffs to publicly speak out as much as they want and have control over their individual privacy at the same time."

Over the years, Christensen said she noticed a trend in those who've come to her firm for help: Victims tend to be female and petite, live alone, and were inebriated at the time of the alleged assault, she told CNN.

"If a driver is going to enter her home, he has [likely] asked her enough questions and knows she lives alone," she said.

Christensen -- who said she's currently representing 16 women who alleged they've been been raped or attacked by Uber drivers -- will not say how many cases against Uber her firm has handled, citing confidentiality.

Multiple attorneys across the country were similarly silent about their cases against Uber. Like many large companies, Uber requires all parties to sign a confidentially agreement when a case is settled.

"We aren't simply filing cases so Uber [can] pay women money and their lawyers to be quiet about it," she told CNN. "That was a conscious decision that we made. Uber has done a miraculous job at keeping this story quiet."