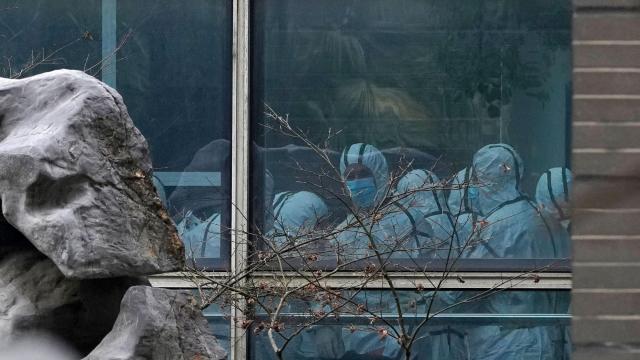 CNN — Investigators from the World Health Organization (WHO) looking into the origins of coronavirus in China have discovered signs the outbreak was much wider in Wuhan in December 2019 than previously thought, and are urgently seeking access to hundreds of thousands of blood samples from the city that China has not so far let them examine.

The lead investigator for the WHO mission, Peter Ben Embarek, told CNN in a wide-ranging interview that the mission had found several signs of the more wide-ranging 2019 spread, including establishing for the first time there were over a dozen strains of the virus in Wuhan already in December. The team also had a chance to speak to the first patient Chinese officials said had been infected, an office worker in his 40s, with no travel history of note, reported infected on December 8.

The slow emergence of more detailed data gathered on the WHO's long-awaited trip into China may add to concerns voiced by other scientists studying the origins of the disease that it may have been spreading in China long before its first official emergence in mid-December.

Ben Embarek, who has just returned to Switzerland from Wuhan, told CNN: "The virus was circulating widely in Wuhan in December, which is a new finding."

The WHO food safety specialist added the team had been presented by Chinese scientists with 174 cases of coronavirus in and around Wuhan in December 2019. Of these 100 had been confirmed by laboratory tests, he said, and another 74 through the clinical diagnosis of the patient's symptoms.

Ben Embarek said it was possible this larger number -- of likely severe cases that had been noticed by Chinese doctors early on -- meant the disease could have hit an estimated 1,000-plus people in Wuhan that December.

"We haven't done any modeling of that since," he said. "But we know ...in big ballpark figures... out of the infected population, about 15% end up severe cases, and the vast majority are mild cases."

Ben Embarek said the mission -- which comprised 17 WHO scientists and 17 Chinese -- had broadened the type of virus genetic material they examined from early coronavirus cases that first December. This allowed them to look at partial genetic samples, rather than just complete ones, he said. As a result, they were able to gather for the first time 13 different genetic sequences of the SARS-COV-2 virus from December 2019. The sequences, if examined with wider patient data in China across 2019, could provide valuable clues about the geography and timing of the outbreak before December.

Ben Embarek said: "Some of them are from the markets... Some of them are not linked to the markets," which includes the Huanan seafood market in Wuhan, thought to have played a role in the virus' first spread. "This is something we found as part of our mission... part of the interaction we had all together."

Changes in a virus's genetic makeup are common and normally harmless, occurring over time as the disease moves between and reproduces among people or animals. Ben Embarek declined to draw conclusions about what the 13 strains could have meant for the disease's history before December.

But the discovery of so many different possible variants of the virus could suggest it had been circulating for longer than just that month, as some virologists have previously suggested. This genetic material is likely the first physical evidence to emerge internationally to bolster such a theory.

Prof. Edward Holmes, a virologist at the University of Sydney, in Australia, said: "As there was already genetic diversity in SARS-CoV-2 sequences sampled from Wuhan in December 2019, it is likely that the virus was circulating for a while longer than that month alone."

Holmes, who has studied the virus' emergence at length, said these 13 sequences might indicate the virus spread for some time undetected before the December outbreak in Wuhan. "These data fit with other analyses that the virus emerged in the human population earlier than December 2019 and that there was a period of cryptic transmission before it was first detected in the Huanan market."

The WHO team gave a three-hour press conference alongside their Chinese counterparts in Wuhan to present their findings this past week. Since then, more details have slowly emerged as to the precise data they did -- and at times did not -- have access to.

Ben Embarek said the mission was given analysis by Chinese scientists of 92 suspected Covid-19 cases from October and November 2019 --patients who had Covid-like symptoms and were severely ill. The WHO team asked these 92 be tested in January this year for antibodies. Of these, 67 agreed to be tested and all proved negative, Ben Embarek said. He added that further tests were needed as it remains unclear if antibodies remain in former Covid-19 patients as long as a year later.

Yet the way in which these 92 cases were spread out across those two months and across Hubei geographically, also intrigued Ben Embarek, he said. Ben Embarek said the 92, as presented to the WHO team, did not emerge in clusters as is common in disease outbreaks. Instead, they were spaced out in small numbers across both months, and across the whole province of Hubei, where Wuhan is located.

"There was no clustering in particular places," he said. "That would have been picked up." It remains unclear if these 92 cases were linked to coronavirus, and what this lack of clustering might indicate.

Ben Embarek also said the mission were able to meet the first Covid-19 patient that China said they knew of. A Wuhan resident in his 40s, the man has not been identified, and had no recent travel history.

"He has no link to the markets," said Ben Embarek. "We also spoke to him. He has a very -- in a way -- dull and normal life, no hiking in the mountains type of things. He was an office worker in a private company."

China has pledged transparency with the WHO investigation. Responding to US criticisms that it should provide access to its earlier raw data, the Chinese Embassy in Washington DC said: "What the U.S. has done in recent years has severely undermined multilateral institutions, including the WHO, and gravely damaged international cooperation on COVID-19," a spokesperson for the Chinese Embassy in the United States said in the statement.

"But the U.S., acting as if none of this had ever happened, is pointing fingers at other countries who have been faithfully supporting the WHO and at the WHO itself," the statement went on to read.

The WHO team hopes to return to Wuhan in later months to continue its investigations, Ben Embarek said, although he was unable to provide concrete dates for a confirmed trip.

He said the team hopes to urgently examine biological samples the experts say were unavailable to them on this first trip, specifically thousands of samples from Wuhan's blood donor bank that date back two years.

"There is about 200,000 samples available there that are now secured and could be used for a new set of studies," said Ben Embarek. "It would be would be fantastic if we could [work] with that."

Ben Embarek said there could be technical difficulties in accessing those samples. "We understand that these samples are extremely small samples and only used for litigation purposes," he said. "There is no mechanism to allow for routine studies with that kind of sample."

He said some other biological test samples that might have proven useful during the Wuhan mission, were also unavailable to them. "A lot of the samples have been discarded after some months or weeks, depending on the purpose of why it's taken," he said.

Ben Embarek said the mission's circumstances -- of intense quarantine periods and social distancing -- had led to some frustrations, along with the global scrutiny of its conduct and findings.

"We were working closely together for a month among two group of a large group of scientists," he said. "And of course, it's a once-in-a-while ... you -- as always, between passionate scientists --you get heated discussion and then argumentation about this and that.

"Remember, we've had the entire planet on our shoulders 24 hours a day for a month, which doesn't make the work among scientists easier."

Correction: An earlier version of this story misstated Peter Ben Embarek's name on second and subsequent references. It's been updated.