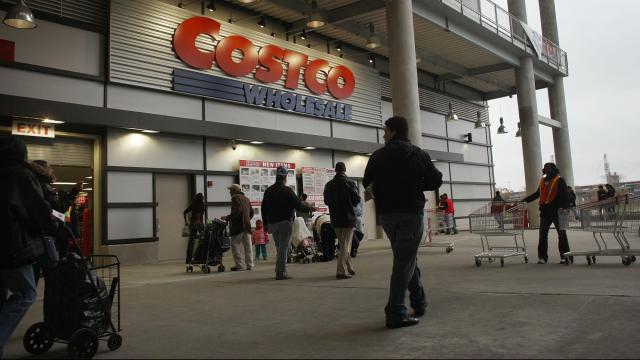 But people shopping at warehouse club stores like Costco, BJ's or Sam's Club, are spending more on packaged food, making more shopping trips, and taking in more packaged food calories than if they didn't shop at a club store, according to a new study.

She says in a best case scenario, you become a member of a club store assuming that shopping there will help you save money since you're buying in bulk, which means you can shop less frequently. The extra food you buy you'll keep in your pantry and use over a longer amount of time. Fewer trips! Food available! Bang for your buck!

"Things seem good from a financial and health perspective," she says. "The problem is, that's not what happens."

Researchers found that not only are you not saving, you are increasing your spending on packaged food by $3.50 per person, per month at a wholesale club.

It may not seem like that will break your budget, Ailawadi says, "but If you're looking at this to save money, it is going in the opposite direction."

And because of the club membership, which is a "sunk cost" and the way that club stores actually make their money, there is a strange mental accounting that takes place, says Ailawadi.

"You'll say, I paid $99, I'm going to make sure I get my money's worth by shopping in the club store every chance I get," says Ailawadi, as a way to justify more frequent store visits and larger shopping baskets.

Similarly, there is an increase of 2.5 shopping trips per month per person, on average. And not only are there more trips, but the warehouse club stores tend to be farther away from people's homes than a supermarket, contributing to more time and gas spent shopping.

As far as the food you're taking in, shoppers at club stores take in 3,500 more packaged food calories per person, per month than if they had not shopped at the club store. Specifically, that translated into an 11% increase in consumption of fats and a 5% increase in sugar.

There are specific attributes of the club store that causes this, Ailawadi says, including the fact that you have to buy in bulk.

"We know that no matter how self controlled you are, when there is more in the home you consume more," she says, citing her own previous research, as well as others'.

This finding did not surprise the researchers. But what was surprising to them was that the trend was consistent across the board.

"We didn't see any significant difference across demographic categories such as education, health consciousness, and even income," Ailawadi says.

So is buying in bulk always bad for you?

The short answer is no, says Ailawadi.

If you have a club membership and want to make the most of it, you should try to plan your shopping, says Ailawadi. Much of the increase in spending and consumption comes from spontaneous purchases. Also: don't trust yourself to go slow on packaged food you've already bought.