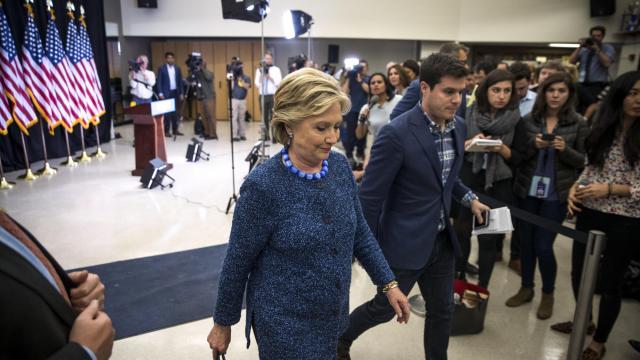 Democrats have yearned for a moment of political exoneration ever since Hillary Clinton’s defeat in 2016. They have looked to Russian interference in the campaign, claims of bias in the media and allegations of Republican lawbreaking to explain an upset that few in the party foresaw.

Perhaps most of all, Democrats have vented indignation at the FBI and its former director, James B. Comey, for reviving the issue of Hillary Clinton’s private email server in the last days of the race.

The inspector general’s report criticizing Comey for his flamboyant handling of the Clinton investigation sent an angry thrill through the ranks of Democrats and Clinton’s allies. Michael E. Horowitz, an investigator not appointed by Trump, concluded that Comey had twice breached the bureau’s traditional discretion: first by holding a July 2016 news conference to announce he would not charge Clinton with mishandling classified information, and then later sending a letter to Congress disclosing that the agents were scrutinizing new evidence in the matter.

In many respects, those findings mirrored Democrats’ own assessments of Comey — save for the omission of certain four-letter words.

But if the report appeared to validate their grievances against Comey, it offered scant relief to Clinton loyalists. For some of them, it intensified the agony of Trump’s surprise win — cementing Democratic suspicions about the fairness of his election, but leaving them without recourse to address them.

“Reading this report clearly makes me sick,” said Donna Brazile, who was chairwoman of the Democratic National Committee during the 2016 general election. “It confirms what we all believed at the time.”

The report, Brazile said, strengthened her view “that 2016 will always be an election where there’s an asterisk.” Randi Weingarten, president of the American Federation of Teachers and a longtime Clinton ally, said the report showed there had been a “double standard” in the election, whereby the FBI revealed information casting Clinton in an unflattering light while concealing investigations into Trump.

“It’s disappointing and infuriating,” Weingarten said. “There is a reason for these norms of not commenting, knowing full well that comments can sway public opinion.”

While Weingarten called the inspector general’s report a “service to the country,” she said it brought no solace on a personal level. “There’s no sense of vindication for one reason: look who’s in the White House right now,” she said.

And Robby Mook, Clinton’s former campaign manager, said in an email that the report was concerning for reasons beyond Comey’s “bad judgment.” It also documented the perception, within the bureau, that Comey sent his October letter in part because he feared word of the investigation would leak — something Mook said happened in other instances, to Clinton’s detriment.

“There was a steady stream of leaks about the Clinton investigation for months but not a word about the counterintelligence probe into the Trump campaign,” Mook said. “This, too, gave voters a false impression. I hope this report is a source of introspection for the professionals at the FBI.” Comey’s status as a Democratic bête noire is nearly 2 years old, dating to his news conference on July 5, 2016, that the inspector general described as “extraordinary and insubordinate.” But it was his letter to Congress nearly two weeks before the 2016 election — termed a “serious error in judgment” by the inspector general — that transformed him, for Democrats, into a starring villain of the presidential campaign.

Clinton offered only a laconic public reaction Thursday to the inspector general’s report, highlighting on Twitter a finding that Comey had at times used a personal email account to conduct official business. “But my emails,” she tweeted, invoking a phrase often used by her supporters to express exasperation about what they view as the mistreatment of Clinton during the election.

She has been more expressive about Comey at other times. Within days of her loss, she named the FBI director as a key culprit: she told donors on a phone call that Comey’s letter had “stopped our momentum” at the race’s end. At a public event in May 2017, she identified Comey’s announcement as a turning point: “If the election had been on Oct. 27,” she said, “I would be your president.” (Comey sent his letter on Oct. 28, 2016.)

Clinton’s campaign strategists have long been convinced that the Comey letter changed the direction of the race, burying her closing message and helping Trump reverse the fracturing of his support on the right after the release of the “Access Hollywood” tape. In the absence of a furor like the one instigated by Comey, the publication of a recording that showed Trump boasting about grabbing women’s genitalia could well have been the defining event of the campaign.

Experts differ on whether public opinion data suggests Comey’s letter tipped the election. An analysis by the American Association of Public Opinion Research found “at best mixed evidence” to support the claim that Comey’s letter was decisive. The study found that Comey’s letter had “an immediate, negative impact” for Clinton but questioned whether that effect lasted through Election Day.

But there is no question that Comey’s choices had an effect on the campaign: His summer news conference and his missive to Congress plainly amplified the issue of Clinton’s email server and her handling of classified information. Trump seized on both events, citing the first in countless denunciations of the Obama administration — which he accused of going easy on his Democratic opponent — and wielding the second as a cudgel in the campaign’s final days.

In addition to chiding Comey for sending that letter, the Justice Department report also concluded that there was no evidence of political bias in the FBI’s treatment of Clinton, puncturing Trump’s claim of favoritism.

Steve Elmendorf, a Democratic lobbyist who helped raise money for Clinton’s campaign, said the inspector general’s report reinforced Democrats’ view of how the FBI handled the election. He said Comey’s subsequent clashes with Trump and firing had complicated Democrats’ judgments of the former bureau director but said nothing could “forgive the original sin of impacting the election.”

And the report, Elmendorf added, was no salve for the wounds of 2016.

“People are so deep in all the other terrible things Trump has done,” he said. “There is no psychic relief from what happened, other than winning the next election.”