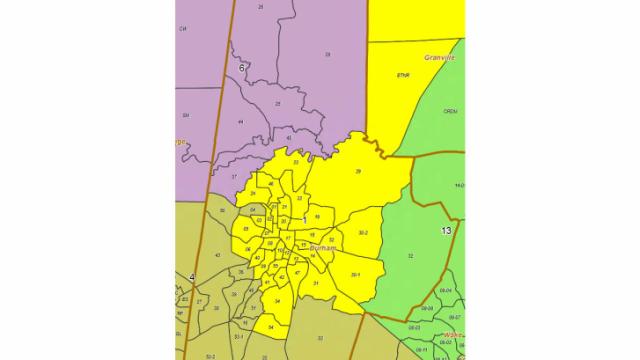 Raleigh, N.C. — It sounds like a vaudeville joke but can be an all-too-serious question for some communities: How many congressmen does it take to represent a county?

In the case of Durham County, the answer is "four." Democrats G.K. Butterfield and David Price and Republicans Howard Coble and George Holding all represent pieces of the city of Durham and Durham County.

"It has the potential of being a disservice," said Coble, who is retiring from Congress at the end of this year.

When he first started serving in Congress, his Greensboro-based district covered three counties: Alamance, Guilford and Davidson. Today, the 6th Congressional District sprawls through 10 counties, splitting four of those with other lawmakers.

"Overall, if I had my druthers, I would eliminate violating county lines," Coble said.

There's potential, he said, for voters to be confused about which representative they should go to with a constituent service request and potential problems getting lawmakers and local officials to pull together on important issues, although he added, "I haven't encountered any problems as far as I know."

Ferrel Guillory, a journalism professor and director of the Program on Public Life at the University of North Carolina at Chapel Hill, said it shouldn't surprise anyone to see large urban counties split among many representatives. Those counties, he said, are where populations are growing the fastest.

"Having more congressional districts in a county give that county more influence in Washington," Guillory said. "But it doesn't necessarily give you consistent direction."

Partisan and ideological splits can make it more important for local officials to know which of their various congressmen are most likely to help with a particular issue.

"Congressman Holding doesn't have or want influence with the White House, but Rep. Price does," Guillory said.

Local officials say having multiple congressional representatives to deal with can be a double-edged sword.

"It can be advantageous, or you can take the position that it's really difficult to get the support from all four individuals," said Michael Page, chairman of the Durham County Board of Commissioners.

One place Durham will be looking for all four representatives to pull together will be mass transit, particularly a proposed light rail line between Durham and Raleigh.

"It would be helpful if we could get them to agree on transit," said Durham Mayor Bill Bell as he drove to a meeting of big-city mayors this week.

For voters, Bell said, the mishmash of district lines can be confusing. In the past two years, a large block of Durham voters found themselves in the 1st Congressional District, which is largely based in eastern North Carolina.

Butterfield, a Democrat who has represented the 1st District since mid-2004, "has made a lot of effort to get known in Durham," Bell said.

Holding, a Republican running for his second term, represents a small slice of the easternmost edge of the county and and city.

"I think it's actually very much a benefit," Holding said of counties with congressional splits.

Most work in the U.S. House, he said, gets done through the committee system. Having more congressmen increases the chances that an issue facing a particular county or municipality will fall under one of those congressmen's committees.

Holding's 13th District splits all eight counties it runs through with at least one other representative, including Wake County. He said it can be useful to have members of two different political parties representing an area's interest. For example, when the federal sequester threatened to curtail tobacco quota buyout payments, he was able to prevail on House Republican leaders, while 7th District Congressman Mike McIntyre was able to push Democratic officials in President Barack Obama's administration.

Price agreed that, when congressmen are pulling together, it can work well for a particular geographic area.

On an issue such as transportation needs, Price said, "if we had a situation where all four were on board with respect to the county's transportation needs and weighed in with our particular political circles, that could be very helpful." On the other hand, he said, if one member wasn't on board, he or she could make it very difficult to push a local agenda in Congress.

He called Durham's four-way split "unprecedented" and said, "There's almost no way that can work well."

Rather than local governments, Price said, it is constituents who are hurt by splitting counties three and four ways. He said that voters regularly say they are confused about what Congressional district they are in and for whom they are voting.

"I would say voter confusion is very high," he said.

As well, his constituent service operation is spread more thinly across seven split counties than when it served a more compact district centered in the Triangle.

"There's just no way that I can undergo that kind of transition without spreading my resources and attention more thinly," he said.