Clayton, N.C. — They are teachers, business owners and church leaders. They want to know what to do if they face someone trying to commit a mass shooting.

Police departments around the country are teaching people how to protect themselves from an active shooter. Clayton police did their part during a class on Saturday. Dozens of people spent their day learning and thinking about how to react in a worst-case scenario.

"You have to be aware of your surroundings," said Sgt. Keith Garner, Clayton Police Department training coordinator. "It's becoming a trend for law enforcement to do this stuff."

"What do we need to be doing as a church, I think that was important for us," said Mike Raley, the pastor at Victory Baptist Church.

Raley sat near the front of Saturday's class, one police hope to hold at least once a month. He said he wants to protect the people in the pews at his church.

"You see this happening all over the United States, and we can't think to ourselves 'this won't happen to us'," Raley said. 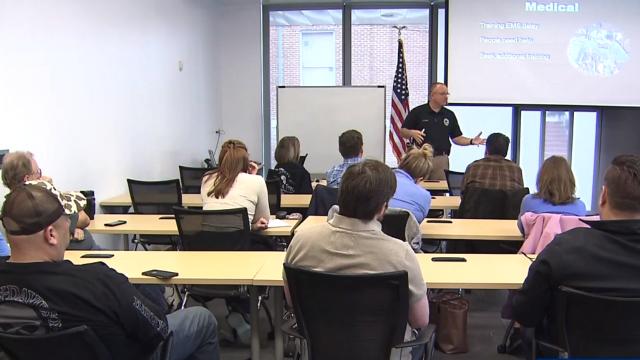 Garner agrees with the pastor. He has been trained on how to lead these classes. He knows what happens when people do not know how to react to an active shooter.

"Being in a situation and having nothing to fall back on leads to almost certain death," Garner said.

He said you should be aware of their surroundings, the exits to safety. Be prepared to run, hide or fight, if it comes to that.

How to stay alive if you are hurt.

"I think it is fear, but it is the proper response to that fear that we need to teach people," Garner said.

He also said we can prevent attacks by speaking up and reporting what doesn't feel right.

"You need to report it, so at least it can be investigated," Garner said.

Raley says in our society, at this moment, it is a threat you can’t ignore.

"As a community and a nation, we need God," Raley said.