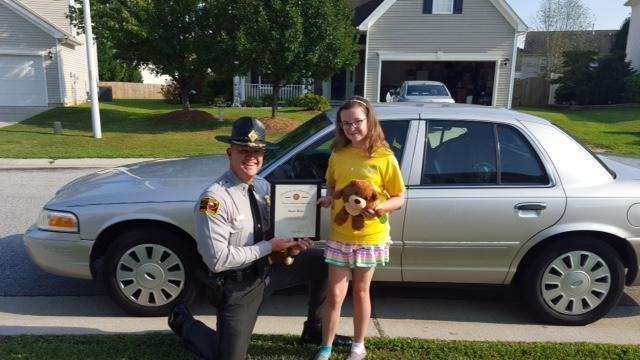 Clayton, N.C. — Megan Millar of Clayton wanted to do something special for the community. After reading an article in a local newspaper about a young boy donating stuffed animals to troopers, she wanted to contribute as well.

Instead of receiving gifts for her 11th birthday this year, she asked her friends and family to bring new stuffed animals to donate to the State Highway Patrol.

On Thursday, Lt. Jeff Gordon met with Megan to collect the stuffed animals and present her with a Certificate of Appreciation plaque from Col. Bill Grey, commander of the State Highway Patrol.

"The Highway Patrol would like to personally thank Megan for her thoughtful contribution," Gordon said.

The stuffed animals will be given to troopers across the state to place in their patrol cars.

"At times of tragedy, such as collisions, man-made disasters or any time of distress where a child is involved, we give the stuffed animals as comforting tool. It calms them down and makes them feel at ease," Gordon said.