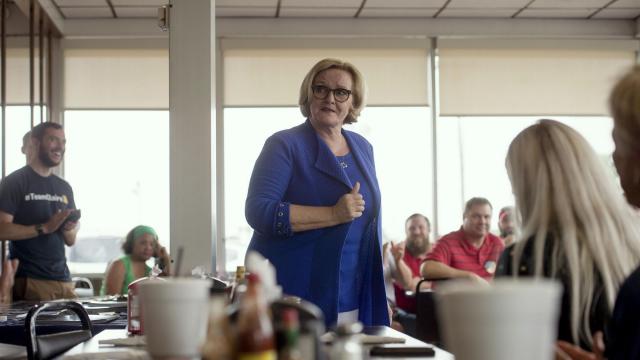 Sen. Claire McCaskill, the Missouri Democrat facing one of the country’s toughest re-election races, raised eyebrows Monday when she distanced herself from leading members of her own party, including two possible presidential hopefuls, Sens. Elizabeth Warren and Bernie Sanders, in a Fox News interview about “crazy Democrats.”

McCaskill, who has been attacked by her Republican challenger, Josh Hawley, as too liberal for Missouri, was asked on Fox about a radio ad that sunnily describes her as “not one of those crazy Democrats.”

When asked who she considered to be crazy Democrats, McCaskill pointed to liberal activists who have publicly confronted Trump administration officials and other Republican figures in recent months.

Does she think any of her colleagues in the U.S. Senate are crazy Democrats?

“Well, I would say this, I would not call my colleagues crazy,” McCaskill told the interviewer, Bret Baier. “But Elizabeth Warren sure went after me when I advocated tooling back some of the regulations for small banks and credit unions. I certainly disagree with Bernie Sanders on a bunch of stuff.”

Neither Warren nor Sanders responded to a request for comments.

McCaskill is a famously shrewd politician adept at surviving as a Democrat in one of the most purple states in the country, which she has represented in the Senate since 2006.

She is one of 10 Democratic senators who represent states won by President Donald Trump in 2016 — in Missouri, by almost 20 points.

Republicans view many of those seats, including hers, as possible pickups next week, when strategists see slim hope for a Democratic takeover of the Senate.

This year, McCaskill is facing a tough challenge from Hawley, a telegenic dyed-in-the-wool conservative and former law professor who has served as Missouri’s attorney general since 2016, when he won more votes statewide than Trump.

Hawley has assailed McCaskill for months as out of touch with average voters in the state, both for her considerable personal wealth and for her voting record, which he has called too liberal for the state.

She has rejected that characterization, pointing to her working-class roots and her votes in favor of about half of Trump’s Cabinet nominees and most of his judicial nominees.

McCaskill voted against the nomination of Brett M. Kavanaugh to serve on the Supreme Court, however, a move that Hawley has seized on as an example of her left-wing inclinations. After the vote, he described her as “a partisan ally and reliable supporter of Chuck Schumer and the Democrats in Congress.”