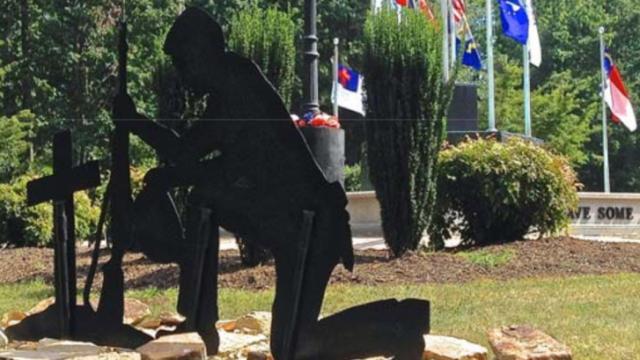 King, N.C. — Leaders in the Stokes County city of King voted 3-2 Tuesday to remove a statue of a praying soldier at a local park, saying the cost of fighting a federal lawsuit would "greatly exceed" the city's insurance policy limits.

"The decision to settle this case has been very difficult for the King City Council," the city said in a statement.

The moves comes after a two-year legal battle between the city and Steven Hewett, a former police officer and U.S. Army veteran who claimed the city promoted Christianity at a veteran's memorial that is situated in King's Central Park.

The city removed a Christian flag from the memorial in 2010 but refused to remove the statue, which depicts a soldier kneeling at a cross.

Americans United for Separation of Church and State filed the lawsuit on Hewett's behalf in 2012, claiming the statue and other actions by the city conveyed that it "treats only Christians as patriotic Americans – and treats others … as second-class citizens."

In a news release Wednesday, the city said it had already spent more than $50,000 in legal costs that were estimated to approach $2 million without any assurance of a win in court.

"While the Council did not wish to settle the case, the financial implications to the city were such that it was not reasonable or responsible to burden the city's taxpayers with tax increases to fund a defense to Mr. Hewett's lawsuit," the news release stated.

"Protracted and costly litigation in this case was in no one's interest,” the nonprofit's legal director, Ayesha N. Khan, said in a statement posted on the group's website. "We are pleased that this agreement has been reached."