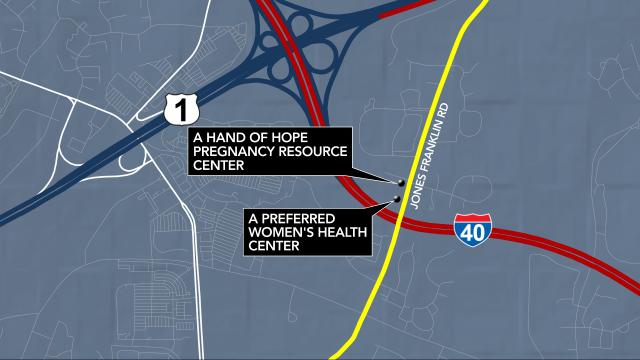 Raleigh, N.C. — An anti-abortion group is suing Raleigh over the City Council's decision last month not to rezone property so they could move next to a clinic that provides abortions.

A Hand of Hope ministry, which operates the Your Choice Pregnancy Clinic and provides free pregnancy services, purchased property at 1522 Jones Franklin Road, next to A Preferred Women's Health Center, and wanted to move there from leased space about a quarter-mile away.

The City Council voted unanimously July 5 against a zoning change that Hand of Hope needed, saying the request was inconsistent with the city's comprehensive development plan because it wouldn't be the most efficient use of the property or generate as much tax value as a large, more coordinated office development.

Council members didn't address arguments by supporters of the rezoning that it would provide women options for handling their pregnancies or the fears of opponents that putting an abortion clinic and an anti-abortion office next to each other would produce conflict.

Hand of Hope argues in a federal lawsuit filed Wednesday that a local Citizen Advisory Council and Raleigh's Planning Commission both supported the rezoning as consistent with the comprehensive plan. The group alleges that the city has violated its First Amendment rights to get a religious message out to a specific audience and its equal protection rights under the Constitution because city planning guidelines would allow churches, civic clubs and other groups to locate on the property.

"Unless restrained by this Court, Raleigh will continue to apply and enforce its land use regulations in a manner which threatens, interferes with, and unduly burdens the fundamental rights of undue children to begin life with a sound mind and body by interfering with a child's mother's ability to receive free pregnancy education and from seeing images of the child which might cause the mother to choose to give birth rather than choose abortion," the lawsuit states.

The suit alleges that the City Council's decision was "content-based" because of Hand of Hope's anti-abortion efforts and violates the federal Religious Land Use and Institutionalized Persons Act of 2000, which is designed to prevent discrimination against religious organizations through local land use regulations.

Hand of Hope says the rezoning denial has saddled it with property it cannot use and will have difficulty selling, prevents it from expanding its services to clients and has turned away volunteers eager to work at the new location. The lawsuit seeks a court order overturning the City Council’s decision.

"The City Council is not above the law and tried to hide their political power play. Thankfully, the federal law was put in place to prevent politicians from masking their political preferences behind broad discretionary regulations," Hand of Hope attorney Noel Sterett, said in a statement. "I hope we can all agree that our freedoms, property rights and a woman’s right to be fully informed should not be subject to the political whims and discretion of a few City Council members."

City officials declined to comment on the lawsuit Thursday.