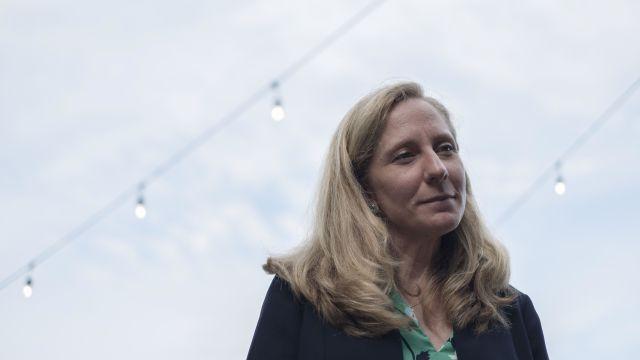 Abigail Spanberger, the Democratic candidate challenging Rep. Dave Brat of Virginia, sent a cease-and-desist letter to Corry Bliss, the executive director of the Congressional Leadership Fund, which has raised more than $100 million to help Republicans in the midterm elections. She demanded the super PAC destroy all copies of the form and agree to not use the information in any fashion.

“I write as a former civil servant and as an American, in shock and anger, that you have tried to exploit my service to our country by exposing my most personal information in the name of politics,” she wrote.

“CLF follows the letter of the law in examining any candidate’s background and Ms. Spanberger was no different,” Courtney Alexander, a spokeswoman for the group, said in the statement.

The group also released a portion of the security clearance application, blacking out some personal information.

Graham Wilson, a lawyer for Spanberger’s campaign, said that explanation, which laid the mistake on the Postal Service, did not ring true. “In this unredacted form, this is not a document that the government can provide under the Privacy Act,” he said.

Spanberger, 39, said in the letter that she had “clear evidence” the Congressional Leadership Fund had provided a copy of her security clearance application to “at least one news outlet,” adding, “I am not aware of any legal way that CLF could have this document.” In an interview, she said she suspected the group was trying to exploit a brief time when she taught at a private Islamic school funded by Saudi Arabia.

The super PAC validated that suspicion in its response, going on at some length to try to link the school — called “Terror High” in an earlier news article — to terrorist activity.

The application was one of two that she completed for government positions, for a law enforcement job at the Postal Service and for her position with the CIA.

At a political event this month, Spanberger said she was approached by a reporter for The Associated Press, who showed her a copy of the security form and said the leadership fund had provided the document on a background basis, meaning that the source would typically not be named. The reporter pulled up a copy of the form on his email, and Spanberger said she was “100 percent” certain it was hers.

The forms ask for detailed personal information about work and health and also include vital data like a Social Security number.

“I am proud of my background and my service, and not ashamed of the information I submitted,” she said. “I have nothing to hide in my background. But, as any American in a similar situation would be, I am concerned about my privacy and security.”

Spanberger, a first-time candidate, served in the CIA as a covert officer overseas for eight years, much of it investigating international terrorism cases, and has used that part of her biography in her appeal to voters in Virginia’s 7th Congressional District, which includes the suburbs of Richmond and extends north to far reaches of exurban Washington.

She has made the race, which is rated a tossup by the Cook Political Report, surprisingly competitive.

“When I decided to run for Congress, I took stringent measures for my campaign because, as a former CIA operative, I assumed I would be the target of attacks,” she said in the letter. “But I expected those attacks to come from foreign adversaries, not domestic groups associated with members of Congress, like CLF.”

Even before being approached by a reporter, Spanberger said in the interview that she had become suspicious the application had been leaked because Republican-aligned groups conducting “push polling” in the race had been asking respondents whether they knew she had once taught at the Islamic Saudi Academy in Alexandria, Virginia, an international baccalaureate program.

One of her supporters received a call from the polling company and reported that she was asked if she would be less likely to support Spanberger if she knew that the candidate had taught at a school funded by the Saudi royal family that had “numerous students arrested for terrorism,” Spanberger said. A recent graduate from the University of Virginia at the time, Spanberger returned to the United States in 2002 after teaching in Germany and earning a master’s degree. She applied for a job at the CIA that year and was told in December that she had a conditional offer pending her background check, which she was told could take at least six months.

She waited tables in the interim, and a colleague asked her if she would be interested in a temporary job teaching English at the academy to cover for another instructor’s maternity leave, Spanberger said.

As she awaited final word from the CIA, she took a job at the Postal Inspection Service, the law enforcement arm of the Postal Service. She said she filled out the federal forms for both jobs at about the same time. She also said she informed the CIA each time she took on new employment.

National security experts said that the unauthorized release of such a highly confidential document is particularly troubling if it turns out to not be an isolated episode.

“It calls for a tremendous amount of extremely private, personal information, and so to the person whose information is at stake, it is extremely significant,” said David Kris, a founder of Culper Partners and a former assistant attorney general for national security.

Spanberger noted that she, like millions of others, had been notified that her personal information may have been compromised in 2015 during a breach at the federal Office of Personnel Management. U.S. officials have said privately that they believe the hacking could be traced to the Chinese government.

Spanberger is among more than a dozen Democratic candidates this year with strong background in national security through service in the military or at the intelligence agencies.

Rep. Ben Ray Luján, D-N.M., chairman of the Democratic Congressional Campaign Committee, sent a letter Tuesday to more than a dozen candidates in his party making them aware of Spanberger’s complaint and urging caution.

“This is an official government document that only President Trump’s administration should have in its possession in its unredacted form,” Luján said.

“To be clear, we have no reason to believe that Republican groups have illegally obtained any of your personnel files, nor are we certain how CLF got Ms. Spanberger’s document in the first place,” Luján said. “But even the evidence of this isolated incident is deeply troubling.”

A spokesman for Ryan, Jeremy Adler, said, “We cannot speak to the activity or behavior of outside groups.” The Associated Press declined to comment directly on the issue. “As a matter of long-standing policy, The Associated Press does not publicly discuss its news gathering methods or sourcing,” said Bryan Baldwin, a spokesman for the news organization. “In this instance, The AP did not publish a story on this topic.”

President Donald Trump’s persistent attacks on the intelligence agencies, notably in connection with its assessment that Russia interfered in the 2016 presidential campaign to help him, have given rise to complaints that a “deep state” exists in the government that is working to undermine the president.

But Spanberger is looking at that from the opposite perspective.

“I personally don’t see that they only have my documents,” Spanberger said. “I just happen to be the canary in the coal mine and we had someone bring it to my attention.”

She added, “I have nothing to hide. If they need a canary in the coal mine, I’m glad it’s me.”