Christmas Events: Get a head start on them now 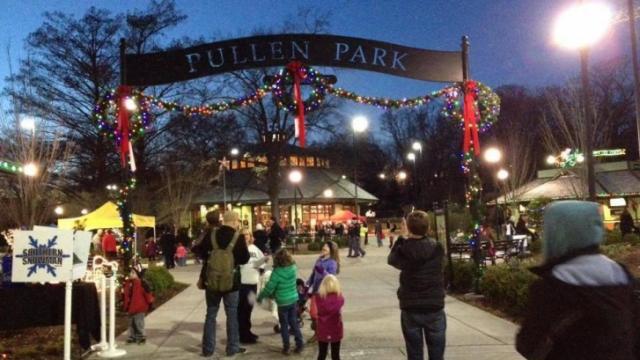 I know. It's not even October yet and here we are talking about Christmas. I say this: Don't shoot the messenger.

Tickets for Christmas shows and events are on sale now. Many will sell out as we get closer to the big day. In fact, the tea with Santa event at The Umstead in Cary is so popular at $50 a head that it sold out within 45 minutes at the beginning of this month. I'll be talking some more about all of this on the morning news on Fox 50 around 8:30 a.m. or so on Wednesday.

So, here's the information. Do with it as you see fit!

Tickets for Pullen Park's Holiday Express went on sale back in July and they are going fast. As of Monday morning, of the 11,400 tickets that were available, only 4,383 were left! The event runs from 4 p.m. to 9 p.m., nightly, Dec. 4 to Dec. 7 and Dec. 11 to Dec. 14. Visitors take a ride on the train and carousel and enjoy other activities at the park, which is decorated for the season. This year, guests buy tickets for a designated train boarding time. Many of the departure times already have waiting lists. There are still some tickets for all departure times on Thursday, Dec. 4, and Thursday, Dec. 11. You also can squeeze in after 7 p.m. on some nights. But, if I could make a wild guess, those slots will fill up soon. Tickets, which are $8, can be purchased online or at any staffed Raleigh Parks, Recreation and Cultural Resources facility, including Pullen Park.

Disney on Ice, which features "Frozen" this year, was so popular that the PNC Arena actually added a tenth show to the line up when it hits Raleigh Dec. 10 to Dec. 15. Many seats sold for these shows months ago, but there is still time if you have a Frozen-loving kid in your midst.

You can't get your tickets now for the Museum of Life and Sciences' Santa Train, but you can mark your calendars for when tickets for this popular event will go on sale. That is early November for museum members and Nov. 11 for the general public. This event will run Dec. 3 to Dec. 7; Dec. 10 to Dec. 14; and Dec. 17 to Dec. 21 this year. Tickets are between $15 and $20.

My girls and I love seeing Raleigh Little Theatre's production of "Cinderella" each year. While the Disney version of this classic doesn't have anything to do with Christmas, the Raleigh theater's version takes place during the holiday. For decades, it's been the community theater's holiday show and it is absolutely hilarious and wonderful for kids and adults. This truly is a great show for all ages and people - not just little girls who love princesses. Many like to get seats along the aisle for a better chance at having the prince try the glass slipper on their foot when he comes off stage and into the audience. Lots of kids will be dressed for this one in their Cinderella (or probably Elsa or Anna) best. The show runs Dec. 5 to Dec. 20. Tickets are $33. Tickets in the front and along the aisle do go first and most shows will sell out. Charles Phaneuf, the theater's executive director, tells me that now is the time to grab them.

As I've reported, the N.C. Museum of Transportation will hold its first Polar Express event this year on select days from Nov. 28 to Dec. 22. The event tells the story of the classic children's book, which involves a boy riding a train to the North Pole and getting a silver bell from Santa. Actors will tell the story while visitors take a ride on the train at the museum. Tickets start at $24. Some of the time slots have sold out, but there are tickets available now.

The Great Smoky Mountain Railroad in Bryson City, which is about five hours from the Triangle, also will host its very popular Polar Express this year from early November to Jan. 4. Some days are sold out already, but there are still some departure times, including weekends, that are open.

Closer to home, the New Hope Valley Railway hosts its Santa Train Dec. 6 to Dec. 7 and Dec. 13 to Dec. 14. Santa comes on board to celebrate as you travel through southwestern Wake County. Tickets are on sale and there are plenty available, but these often sell out as well.

Carolina Ballet's The Nutcracker, which features some great magic in the first act, will run on select days from Nov. 28 to Dec. 28, starting at the Durham Performing Arts Center, then moving to UNC Memorial Hall and finally landing at the Duke Energy Center for Performing Arts in Raleigh. Tickets also are on sale for this. This is another annual tradition for my family (thanks to my mother-in-law!). I'm told that ticket sales have been brisk, but there are lots of seats available for all of the shows. Communications manager Elizabeth Parker said the ballet already is in Nutcracker mode. The children who perform in the show are rehearsing now. And new this year: The same magician who created the magic for the show a few years ago is making a new trick for the first act. It will replace the levitating angel. "It's going to be much bigger and grander," Parker promises.

Marbles Kids Museum's An Evening with Elves is 6 p.m. to 9 p.m., Dec. 5, and typically sells out. Tickets, which are $25 for members and $30 for non-members, are on sale now. The evening includes dinner, desserts, a visit with the Snowflake Fairy and other seasonal activities, plus after-hours play in the Raleigh museum.

Finally, Storybook Theatre, a collaboration between Broadway Series South and Marbles Kids Museum, will present "Rudolph the Red Nosed Reindeer" on select days from Nov. 28 to Dec. 24. If this show is anything like last year's "Frosty the Snowman," it will be worth seeing! Tickets start at $20 for this one. It's at the Duke Energy Center for Performing Arts in Raleigh.

Update: A reader asked me about age recommendations for each of these. I'd really say it depends on the child and the family. There are a few questions parents should ask themselves. Are you OK if your child doesn't sit through the entire show or gets too tired to take part in all of the activities, especially considering the expense of some of the tickets? Some of the events can have long lines. Will your child be able to handle that? For evening performances and activities, does your child do well past her bedtime?

Here's a good rule of thumb for live shows that a producer of family shows shared with me years ago: If your child is able to quietly sit through an entire movie of about 90 minutes to two hours, he's probably ready to sit through a live show.

My younger daughter, now age 5, was riveted to her seat for The Nutcracker, which is a long show, when she was 3. She loved Cinderella at age 4. If Rudolph is anything like the Frosty show at the Duke Energy Center, she'll love that one too. It is shorter than most live performances is really designed for young kids and up. But all kids are different. Parents know best what their kids can handle.

Of course, there are many more Christmas events and shows. I'll have more about those as we get closer to that time of year.