Frederick, Colorado — Text and recorded audio files were released by Colorado officials Thursday after an in-prison interview with Chris Watts.

On Feb. 18, over a span of five hours, Watts shared with investigators more disturbing details in how he killed his wife, Shanann, and their two daughters in August 2018. The interview took place in the prison where Watts is serving three life sentences for the murders of his family.

The summary of the interview provides new information from Watts about the day of the murders and about rumors of an affair he had with a coworker while he was married to Shanann.

Chris and Shanann Watts have North Carolina ties. Chris Watts is a Fayetteville native, and Shanann grew up in Aberdeen. While the couple lived in Colorado, Shanann visited family and friends still living in North Carolina often. 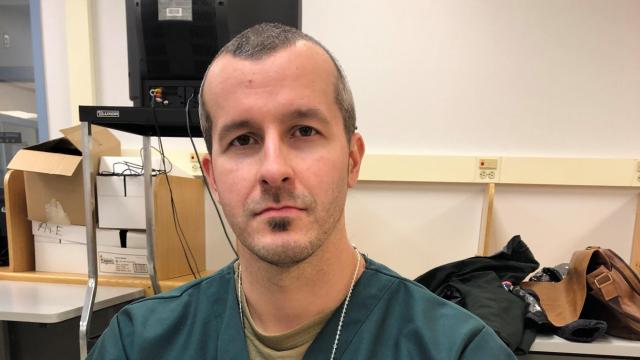 In August 2018, Shanann and Chris got into a fight at their Colorado home, Watts told investigators. Watts originally told police his wife was missing but later admitted to killing her.

After his arrest, Watts told police that he flew into a rage and strangled his wife and daughters, took the three bodies to a remote oil site north of Denver, buried Shanann in a shallow grave and dumped the girls' bodies inside oil tanks.

Police believe Watts killed the three on Aug. 13. The bodies of Shanann, who was pregnant, and the girls were found on Aug. 16.

Watts claims he 'never had any gay experiences'

In the February prison interview, Watts said his attorney told him a Wyoming man named John Walsh claimed to have an affair with Watts. When Watts was shown a photo of Walsh, he did not recognize him, he said. In the interview, Watts claimed he has never "had any gay experiences or interests in the past."

Watts' attorney said Walsh claimed to have met Watts on "WhatsApp," but Watts said he had never heard of that app.

Watts told interviewers in February he was comfortable talking about his affair with Nichol Kessinger.

Watts said Kessinger was the only person he had an affair with and told interviewers he met Kessinger at work in June 2018.

Watts said Kessinger knew he was married but "lied" and said she didn't. He said he didn’t wear a wedding ring at work "because it was getting sized since it was too big after he lost weight and it kept falling off."

Watts admitted to having an affair with Kessinger, telling interviewers he stayed at her house "almost every night while his wife and daughters were in North Carolina" visiting family.

Watts also said "Kessinger wanted to have sex all the time" and that "he never had to worry about saying something stupid around [her] and never had to plan what he was going to say when he was with her."

Watts told interviewers that he vacationed with Kessinger, indicating that the pair spent much of their time together as he and Shanann grew apart. At one point, Watts said he would sometimes question what he was doing with Kessinger.

Watts told interviewers that he did not tell Shanann about his affair with Kessinger but that Shanann told him she knew "there was someone else" the day he murdered her.

Watts denied the affair but said he told his wife that "he didn’t think their marriage was going to work." When Watts told Shanann he didn’t love her, she said, “You’re never gonna see the kids again."

The conversation lasted less than 30 minutes before Watts strangled his wife, he told interviewers.

Watts said Shanann did not fight back or scream, adding he did not know why.

Watts told interviewers his daughter walked in on him while he was disposing of Shanann's body.

He said Bella, their 4-year-old daughter, Bella, walked into their bedroom and asked, "What's wrong with Mommy?"

Watts said he wrapped Shanann in a bed sheet, which was recovered at the oil site, dragged her down the stairs and placed her body in the backseat of his truck. Watts said Bella followed him down the stairs crying.

Watts told interviewers Celeste, his 3-year-old daughter, probably woke up to the sound of him pulling Shanann down the stairs. Watts placed the girls in the backseat and drove Bella, Celeste and Shanann to the oil site.

Watts said he used Celeste's blanket to strangle her and then dropped her into the oil tank. He said he then "did the same thing" to Bella, dropping her into a separate oil tank.

Before he strangled Bella, he said "she asked him in her soft voice, 'Is the same thing gonna happen to me as Cece?'"

Finally, he dug a hole and buried Shanann.

Throughout his interview, Watts admitted to feeling regret and guilt.

He told interviewers he has photos of Shanann, Celeste and Bella in his cell and that he reads to them every night.

He also said he didn't want to see any photos from the crime scene, saying he "prayed for the HazMat workers and anyone else who had to see the aftermath."