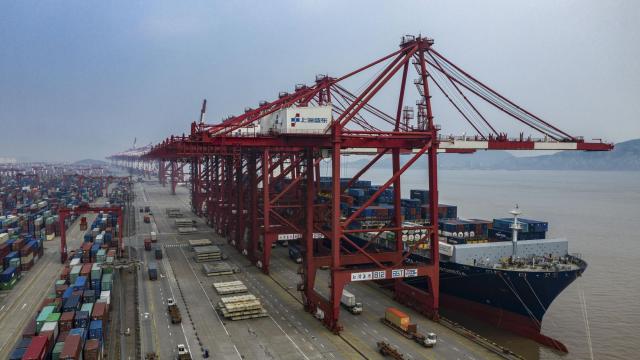 WASHINGTON — President Donald Trump said he would increase taxes on all Chinese goods and demanded that American companies stop doing business with China as his anger toward Beijing and his Federal Reserve chair boiled over on Friday.

Twelve hours after China said it would retaliate against Trump’s next round of tariffs by raising taxes on American goods, Trump said he would bolster existing tariffs on $250 billion worth of Chinese goods to 30% from 25% on Oct. 1.

And he said the United States would tax an additional $300 billion worth of Chinese imports at a 15% rate, rather than the 10% he had initially planned. Those levies go into effect on Sept. 1.

“China should not have put new Tariffs on 75 BILLION DOLLARS of United States product (politically motivated!)” Trump said on Twitter. “Starting on October 1st, the 250 BILLION DOLLARS of goods and products from China, currently being taxed at 25%, will be taxed at 30%.”

In a series of angry tweets earlier in the day, Trump called for American companies to cut ties with Beijing and said the United States would be economically stronger without China. Those comments sent stocks plunging, helping push the market to its fourth straight weekly loss. The president also called the Fed chair, Jerome H. Powell, an “enemy” of the United States and compared him to President Xi Jinping of China, his trade nemesis, after Powell declined to signal an imminent cut in interest rates.

Trump has been counting on Powell to help blunt the effect of his trade war by cutting interest rates to keep the economy humming. While Powell said on Friday that the Fed could push through another cut if the economy weakened further, he suggested that the central bank’s ability to limit economic damage from the president’s trade war was constrained.

“My only question is, who is our bigger enemy, Jay Powell or Chairman Xi?” the president tweeted.

Trump’s tariff announcement came after financial markets had closed for the day. But his earlier response to China had already unnerved investors, who worry that the trade war between the world’s two largest economies will further drag on global growth. Stocks fell sharply on Friday, with the S&P 500 closing down 2.6%. The Dow Jones industrial average was down slightly more than 2% and the technology-heavy Nasdaq index fell 3%.

Behind the tirade was the growing reality that the type of trade war Trump once called “easy to win” is proving to be more difficult and economically damaging than the president envisioned. Trump’s stiff tariffs on Chinese goods have been met with reciprocal levies, hurting American farmers and companies and contributing to a global slowdown.

On Friday, China said it would increase tariffs on $75 billion worth of American goods, including crude oil, automobiles and farm products like soybeans, pork and corn in response to Trump’s plan to tax another $300 billion worth of Chinese goods in September and December.

The higher rates will only aggravate the financial pain from the trade war, which is already raising prices for businesses and consumers across the globe. Even before the new 30% rate, Trump’s existing tariffs were expected to cost the average American household more than $800 a year, according to research by the Federal Reserve Bank of New York. And Trump’s next $300 billion tranche will affect consumer products like toys, smartphones and clothing.

Retailers said the president’s actions were inflicting pain on American businesses and the economy.

“It’s impossible for businesses to plan for the future in this type of environment” said David French, the senior vice president for government affairs at the National Retail Federation.

Talks between China and the United States have largely stalled, with Beijing refusing to accede to the United States’ trade demands. As economic damage from the yearlong dispute mounts, Trump has taken a scattershot approach to spurring the economy: clamoring for the Fed to cut interest rates, teasing the idea of tax cuts and, on Friday, commanding American companies to do his bidding against China.

“Our great American companies are hereby ordered to immediately start looking for an alternative to China, including bringing our companies HOME and making your products in the USA,” he tweeted, adding, “We don’t need China and, frankly, would be far better off without them.”

Trump also said he was directing the U.S. Postal Service and private American companies like FedEx, Amazon and UPS to search packages from China for the opioid fentanyl and refuse delivery. It was not yet clear on Friday how Trump planned to carry out his demands, including ordering companies to begin seeking alternatives to producing in China. Trump has routinely urged American companies to stop doing business in China and has viewed his tariffs as a way to prod them to move production. While some companies have begun looking for other places to locate their supply chains, including Vietnam, many businesses — particularly smaller ones — say such a move is costly, time-consuming and could put them out of business.

Business groups reacted with deep concern and pushed back against the notion that American companies would sever ties with China at Trump’s request.

“U.S. companies have been ambassadors for positive changes to the Chinese economy that continue to benefit both our people,” said Myron Brilliant, the head of international affairs at the U.S. Chamber of Commerce. “While we share the president’s frustration, we believe that continued constructive engagement is the right way forward.”

Farmers, who have borne the brunt of China’s retaliation, said Trump’s tactics were only making things worse.

“Every time Trump escalates his trade war, China calls his bluff — and why would we expect any differently this time around?” said Roger Johnson, the president of the National Farmers Union. “It’s no surprise that farmers are again the target.”

On Friday afternoon, the president hastily assembled his top trade advisers at the White House — including Treasury Secretary Steven Mnuchin, who joined by telephone — to settle on a response. The president was not aware that China’s retaliation was coming and was angry about being blindsided, according to people familiar with the matter.

Trump ordered up a menu of options and then met with Robert Lighthizer, his top trade negotiator, in the late afternoon to make a decision. After Trump decided that he would raise the tariff rates, the Office of the U.S. Trade Representative was alerted that the increase would be publicized by presidential tweet.

Trump’s tweets on Friday caught most of his advisers and staff by surprise, and prompted alarm. Some of his advisers privately expressed concern that the ferocity of the president’s response could permanently derail the negotiations and could unsettle supporters during an election year.

Michael Pillsbury, a China scholar at the Hudson Institute who informally advises the White House, said that Trump had been considering more draconian options, but settled on the higher tariffs in hopes that negotiations with China would proceed. He said that he expected the two countries would continue to keep the details of what they had previously agreed to confidential and that the lines of communication between Trump and Xi would remain open.

As for Trump’s attack on Xi and Powell as enemies, Pillsbury suggested that it was not meant with ill will.

“The president often speaks with poetic license to make his point,” Pillsbury said. With Congress in recess, there was little response on Friday from Republican lawmakers to Trump’s dizzying series of economic declarations. A spokesman for Sen. Majority Leader Mitch McConnell, R-Ky., said McConnell had yet to issue a statement on the president’s remarks.

Sen. Chuck Grassley, R-Iowa, the chairman of the Finance Committee, said that Trump was right to take a harsh stance against China, but he said that he did not agree with the president’s approach of piling on tariffs and warned that it was harming Americans, including his own constituents.

“China’s economy is hurting as a result, but so too are U.S. consumers and many sectors in the American economy,” Grassley said in a statement. “Iowa farmers have been particularly hard hit and are at risk of permanently losing an export market.”

Trump’s advisers believe he is being urged on by Peter Navarro, a trade adviser who has been the main proponent of continuing down an antagonistic path with China. Navarro tried to play down the escalation on Fox Business Network, saying Beijing’s response was to be expected and would only galvanize support in the United States for Trump’s tough approach to China.

“I just think that the way that China is reacting to this whole thing is simply reinforcing America’s perception of China as a bad actor,” said Navarro, who is considered the biggest China hawk in the administration. “When China tries to bully us, that only strengthens our resolve.”

Navarro said the new tariffs that China was imposing were just a sliver of the overall American economy and that they should not affect growth. He said that actions by central banks to cut interest rates were more significant to the global economy than the trade dispute between the United States and China.

David Dollar, a China expert at the Brookings Institution, said that Trump’s anger appeared disproportionate to the relatively modest retaliation from China that should have been anticipated. However, he said it was notable that Trump’s order to companies appeared to take a page from Beijing’s playbook.

“It’s definitely outside the realm of a free-market economy,” Dollar said of the call for businesses to cut ties with China. “It’s typical of the kind of thing we complain about from China and other economies where a government intervenes outside the rule of law.”