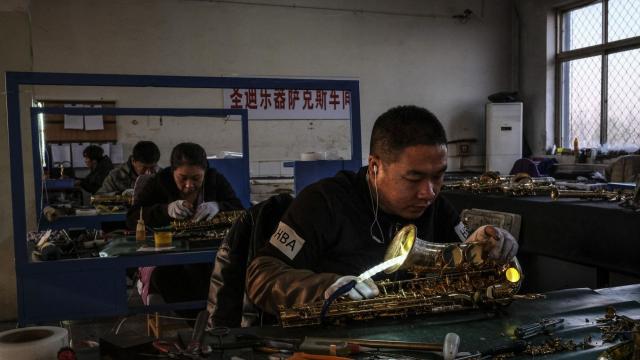 SIDANGKOU, China — By day, the factory workers pound sheets of brass into cylinders and slather metal buttons with glue. By night, they take their creations to the street and begin to play.

The soothing melodies flow through cornfields, street markets and public squares. They interweave with the shouts of street vendors hawking tofu and men playing mah-jongg.

This is the music of Sidangkou, a northern Chinese village of 4,000, where one sound rules above all else: the saxophone.

Farmers take the instrument into fields to belt out patriotic tunes against the sunset. Children play in all-saxophone bands at school. Shopkeepers set their ringtones to the wistful songs of Kenny G.

The saxophone has never had a large following in China, in part because it was long associated with jazz, individuality and free expression. After the Communist revolution of 1949, officials denounced the instrument for producing the “decadent music of capitalists.”

But here in this town, the saxophone is king.

Sidangkou, which calls itself China’s “saxophone capital,” produces about 10,000 saxophones per month at more than 70 factories, according to Chinese news media. The village exports nearly 90 percent of them, primarily to the United States, where they are sold for more than $100 each.

“It’s vibrant and delightful,” said Wang Yuchun, the president of one of the largest producers, Tianjin Shengdi Musical Instrument Co. “It’s part of our lives now.”

For more than a century, the region around Sidangkou has been a hub of musical instrument manufacturing, including traditional Chinese instruments like the sheng, a reed pipe, and the di, a bamboo flute. Factories in the region produce thousands of oboes, trumpets and tubas each year.

Yet nothing seems to have captured the imagination of people here like the saxophone.

Sidangkou, which is near Tianjin, a large northeastern city, began producing saxophones in the 1990s, as China became a powerhouse exporter and Western cultural influences become more prominent.

Assembly line workers began trying their hand at the instrument, mimicking famous players they saw on television. By the mid-2000s, saxophone fever had broken out.

Fu Guangcheng came to Sidangkou in 1995 to work as a polisher on an assembly line. He quickly fell in love with the sound of the saxophone and started formal studies.

Fu said he was proud of Sidangkou. “It’s a miracle that even rural people who are used to holding hoes in our hands can make Western instruments,” he said.

Others have found playing the instrument to be a source of relaxation. They join friends to play together outdoors, often with orchestral tracks blaring in the background.

“It’s just so beautiful, I don’t know how to describe it,” said Zhao Baiquan, 55. “No matter how angry I am, it calms me down.”

The repertoire in Sidangkou leans toward traditional Chinese songs and patriotic tunes, although there are some exceptions.

“Spring Comes to the North,” a Japanese folk song, is a favorite. So is “Going Home,” the 1989 Kenny G song that is widely played in Chinese shopping malls, schools and train stations as they close down.

Jazz is mostly avoided. “It’s beautiful but too difficult,” said Wang Bingjun, a worker at the Tianjin Shengdi factory. “Chinese songs are more familiar and easy to play.” Many of the players are self-taught or follow along with online tutorials.

“Here we don’t have teachers,” said Chen Jinsheng, 56, a farmer who plays in a small saxophone band. “Learning the saxophone isn’t easy, and I’ve taken many detours.”

Some of the more advanced players in the village use live-streaming apps to broadcast lessons online.

The saxophone first came to China after its invention in the mid-1800s and quickly found a place in Chinese brass brands. It later became a staple of nightclubs in the European-dominated treaty port of Shanghai before 1949.

During the Cultural Revolution of the 1960s and 1970s, Western popular music came under attack as decadent and bourgeois. Jazz was banned and the saxophone “disappeared from the music scene,” said Helen Yang, a professor of music at Hong Kong Baptist University.

After China began to open to the world in 1978, the instrument gradually gained a following, largely in urban areas where jazz is more widely played. Now, Chinese factories produce more than 180,000 saxophones a year, said Li Yusheng, a prominent Chinese saxophonist who studies the industry.

Still, while many Chinese families have embraced instruments like the piano and violin, skepticism about the saxophone lingers.

When Wang of the Tianjin Shengdi factory first tried to start saxophone bands at nearby schools in 2003, parents were livid, calling the instrument disruptive and a waste of time.

But attitudes have shifted in recent years, he said. “We asked the parents whether they preferred their children watch a half-hour of television or play saxophone for a half-hour,” Wang said.

Now, three schools in Sidangkou and the surrounding area have saxophone bands. Educators have developed a saxophone curriculum and created exhibits on the instrument’s history.

“I fell in love with it,” said Liu Junrui, 12, a fifth-grader. “The sound is cool. It’s special. It’s different from all other musical instruments.”