Childhood Obesity: Why our kids still struggle; 7 things parents can do to help 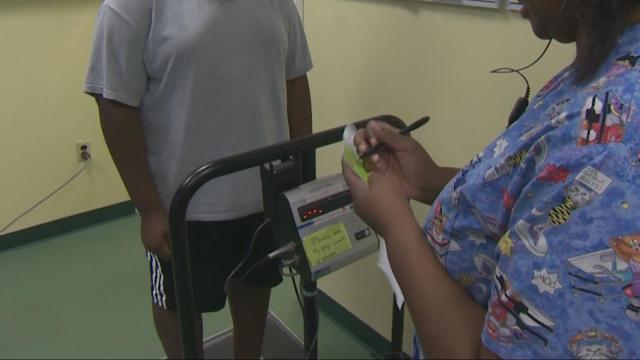 Working with a local school system, Dr. Sarah C Armstrong, an associate professor of pediatrics at Duke Health, had attempted to remove chocolate milk from the cafeteria.

"It's delicious and great for dessert," Armstrong said. "But it's not being used that way."

Instead, kids were drinking it daily, getting much needed calcium, but also filling their bodies with more sugar than they needed. A cup of chocolate milk has 24 grams of sugar. A cup of white milk has 13 grams. Armstrong tried to make the change, getting school lunch workers, doctors and even some kids on board.

"What stopped it was a group of parents who were concerned that their kids would not drink milk at all and they wouldn't get the calcium," she said.

The chocolate milk remains. And the number of overweight children across the country continues to rise. Armstrong said her experience is emblematic of the problem facing our kids. Instead of giving into a fear that the kids won't get any calcium if we pull chocolate milk from their daily diet, maybe we should help the parents.

"Maybe we can help support those parents, who are worried, and help them find other sources of calcium," she said.

Armstrong, a mom herself, said parents shouldn't beat themselves up for the current state of our children's waistlines.

"The study ... only helps us re-emphasize that we all - parents, teachers, coaches - are raising children in an environment that promotes obesity," she said. "We would not see these kinds of numbers and this continued rise in the epidemic based on people just making bad decisions ... If this were easy, everybody would be doing it. We're swimming upstream."

She added: "Until we can really change the environment for our children and make it so they are surrounded by healthy, whole foods and that's the norm and physical activity is regular and expected and just built in their day, we are going to be relying on individual parents. And they are not at fault. Parents are not to be blamed for this. They are fighting it individually, but they are not to be blamed. ... At some point, we all need to be on the same page... step up ... and prioritize our kids."

Researchers, doctors and other experts have long raised alarms about the number of obese and overweight kids in the United States. According to the Centers for Disease Control and Prevention, the percentage of children and adolescents who are obese has more than tripled since the 1970s.

Children with obesity can suffer in the short term and the long term, according to the Centers for Disease Control. They are more likely to be bullied and suffer from social isolation, depression and lower self-esteem. They are at higher risk of developing chronic health conditions, including asthma, type 2 diabetes and heart disease. And they are more likely to become obese as an adult.

A variety of factors are pushing our kids toward unhealthy weights - genetics, community and neighborhood design, not enough sleep, poor eating and not enough physical activity, according to the federal agency.

And children are struggling in some of these areas. They're not getting enough sleep. According to the CDC, two out of three U.S. high school students get less than the recommended eight hours of sleep on school nights. One reason: School start times are so early. The American Academy of Pediatrics has recommended that middle and high school should start no earlier than 8:30 a.m. though many start much earlier.

They're eating too much sugar. According to one study, children and adolescents get about 16 percent of their total calories from added sugars. The U.S. Dietary Guidelines recommend limiting total intake of these discretionary calories, including both added sugars and fat, to 5 percent to 15 percent per day. It's easy to not even realize how much sugar you're consuming. Added sugars are found in 74 percent of packaged foods, including savory foods like bread, sauces and dressings, sold, according to a 2012 study.

And, though we all know that physical activity is good for all of us, only one in three children are physically active every day, according to the President's Council on Fitness, Sports & Nutrition. Most schools don't require physical education or recess, according to one study, though children often spend the majority of their days there.

Armstrong said some responsibility falls on parents and children, but it's not exclusively their fault.

"Bottom line for parents is please don't feel shamed or blamed by this," she said. "You have a hard job, mom and dad. And don't give up, but don''t blame yourself for what's happening."

Making big changes, however, will take time. And parents with kids who are struggling with their weight need solutions now. Armstrong has some tips ...

Don't blame them or shame them

Instead of focusing on what they shouldn't be doing, focus on what they are doing well already. What healthy foods do they love? If broccoli is the only vegetable they'll eat, serve it daily, Armstrong said. If they don't love team sports, but enjoy taking a bike ride around the neighborhood, let them go.

The No. 1 predictor of adult obesity is dieting as a child, teenager or young adult, Armstrong said.

"Americans spend billions of dollars on diets," she said. "It destroys our relationship with food. It turns exercise into something we do to lose weight and not keep our bodies fit. All of these things predict future obesity."

Offer healthy options - and nothing else

At snack time, provide two or three healthy choices and let them pick from those options. If they say "no" to the grapes or carrot sticks, that's fine. But don't offer them gummies or crackers instead. They'll be fine.

Don't be a short order cook

At the table, serve healthy meals. If children choose not to eat anything, that's OK.

"It's their choice not to eat," Armstrong said. "As long as they are not underweight or under the care of a doctor, it's OK sometimes to say no to a meal. It teachers the child and they will experience hunger later and next time they will give it a try."

Focus only on real food

As you've probably heard before, shop around the perimeter of the grocery store where you'll find the vegetables, fruits, meats, cheeses, eggs and other fresh products.

"Spend a minimum amount of time in the middle," Armstrong said. And don't fall for processed food labels that claim your kids will get a serving of vegetables from a cracker or a cup of sugar-laden juice. "It's  so hard because the advertising of foods is really manipulative," Armstrong said.

Be careful of carbs

We all need carbohydrates, but those shouldn't come from processed, high sugar and low fiber foods.

"Whole grains are OK in moderation," she said. "Fruit is OK, but in moderation - one or two pieces of fruit a day. It's still sugar. Round out the rest of the day with just whole foods - meats, cheeses, milks, eggs and vegetables."

Don't expect to pay more just because it's healthy

Frozen vegetables are just as healthy as fresh vegetables, Armstrong said. A bag of dried beans costs 99 cents and has more fiber than any of the carbohydrates kids are eating.

"There's lots of options for low-cost healthy eating," she said.

If a child's weight doesn't improve, Armstrong recommends talking to your pediatrician to get more support and possibly a referral to a child obesity specialist.

"This data shows that we have not turned the corner on this epidemic and the efforts we've put into it, so far, while valuable, are too diluted," she said. "If we care about our children and their future, we have to come together to find stronger and more pervasive solutions to help them grow in a healthier world."