Apex, N.C. — A 4-year-old girl was injured after a car crashed into an Apex home Tuesday night.

Authorities said the car crashed into a bedroom at the home on Kinship Lane just after 8 p.m. and Cassidee Barry was found pinned under a passenger side wheel of the car. 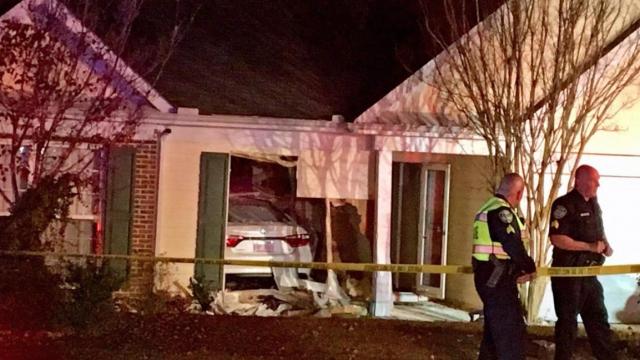 Authorities said the child was conscious when she was transported to Duke Health, and she was in stable condition Wednesday morning. Police said she did not break any bones, and her injuries were not life threatening.

The child lives in the home with her mother and 7-year-old sister Mikaylee Barry.

The girl's mother, Tiffany Barry, says she was unpacking groceries when she suddenly she heard a smashing sound.

"Then I realized there was a car in my daughter's bedroom, and I didn't know where my daughter was," she said.

Barry began screaming for Cassidee, who wasn't responding. A neighbor finally heard her cries, and they found her under the front end of the car.

Rescue crews pulled the child from beneath the car. Cassidee was bleeding on her face and body, but alive.

“It’s just really scary. When we found out about it, we just had to come to see if everybody was OK because [my] kids are so close with them and they play with them, so we wanted to make sure everything was fine with them,” said neighbor Jocelyn Jones.

Authorities said the driver, a 48-year-old woman, was also taken to the hospital following the crash and was cooperating with investigators.

Police said there were no pending charges against the driver, but investigators were working to determine if any charges were warranted.

Investigators did not know what caused the crash but she was not under the influence of alcohol. They're in the process of gathering data from the vehicle to determine if speed or mechanical failure were factors.

They are also considering pictures taken by a neighbor that showed a vehicle with the same license plate number appearing to swerve erratically.

Barry says, on the day before Thanksgiving, they are more grateful than ever to be together.

"I cried a little by her side two or three hours ago for the first time, and she said 'Mom don't cry, I don't like it when you cry,'" Barry said. "God has wrapped his hands around her and kept her safe."