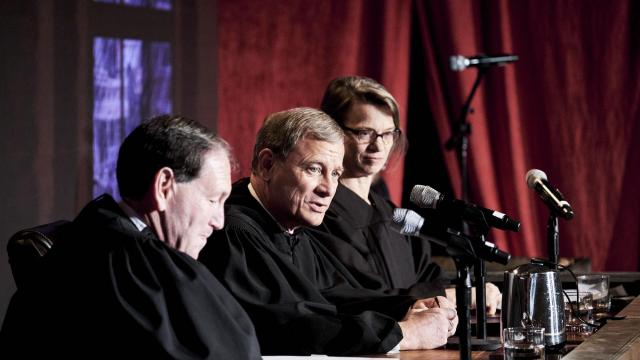 WASHINGTON — Chief Justice John Roberts defended the independence and integrity of the federal judiciary on Wednesday, rebuking President Donald Trump for calling a judge who had ruled against his administration’s asylum policy “an Obama judge.”

The chief justice said that was a profound misunderstanding of the judicial role.

“We do not have Obama judges or Trump judges, Bush judges or Clinton judges,” he said in a statement. “What we have is an extraordinary group of dedicated judges doing their level best to do equal right to those appearing before them. That independent judiciary is something we should all be thankful for.”

That blunt statement may represent a turning point in the relationship between the heads of two branches of the federal government, which until Wednesday had been characterized by slashing attacks from the president and studied restraint from the chief justice.

Roberts, who was appointed by President George W. Bush, made his statement as he is adjusting to a new dynamic on the Supreme Court. The arrival last month of Trump’s second appointee, Justice Brett Kavanaugh, thrust the chief justice into the court’s ideological center, a spot that had long belonged to Justice Anthony Kennedy, who retired in July.

That change gives Roberts, 63, extraordinary power and responsibility, and it may have helped spur his unusual statement, issued in response to a request for comment from The Associated Press.

Later in the day Trump responded to the chief justice’s statement on Twitter. “Sorry Chief Justice John Roberts, but you do indeed have ‘Obama judges,'” Trump wrote, “and they have a much different point of view than the people who are charged with the safety of our country.”

Some legal experts said Roberts may rue his decision to tangle with the president.

“Ultimately, I think this sort of statement will backfire,” said Josh Blackman, a law professor at South Texas College of Law in Houston. “Trump will always have the upper hand to escalate his attacks on the judiciary. Roberts will invariably be criticized for staying quiet. In the end, the court comes out weaker in this sort of struggle.”

Until his statement, Roberts had avoided direct confrontation with Trump.

He was silent during the presidential campaign, when Trump called him “an absolute disaster” and accused another federal judge of bias because of his family’s Mexican heritage. At Trump’s inauguration, Roberts administered the oath of office cordially, and when the president visited the Supreme Court for the investitures of his two appointees, the chief justice welcomed him warmly.

In his majority opinion in a 5-4 decision sustaining Trump’s executive order limiting travel from several predominantly Muslim nations, Roberts discounted incendiary statements from Trump calling for a “Muslim ban,” refusing to condemn them.

“Plaintiffs argue that this president’s words strike at fundamental standards of respect and tolerance, in violation of our constitutional tradition,” Roberts wrote. “But the issue before us is not whether to denounce the statements.”

Breaking his silence Wednesday, Roberts responded to rambling remarks from Trump the day before in which he complained about a decision from Judge Jon S. Tigar, of the U.S. District Court in San Francisco, who ordered the administration to resume accepting asylum claims from migrants no matter where or how they entered the United States.

Trump’s legal analysis of the ruling consisted of the observation that Tigar was “an Obama judge.” The chief justice has passed up other opportunities to respond to Trump’s attacks on judges. He said nothing about Trump’s 2016 attack on Judge Gonzalo P. Curiel of the U.S. District Court in San Diego, who was overseeing a class-action lawsuit against Trump University.

“They ought to look into Judge Curiel, because what Judge Curiel is doing is a total disgrace,” Trump said, adding that the judge, who was born in Indiana, had a conflict of interest because his family was of Mexican heritage. Trump settled the case after the election.

In early 2017, after losing a round in the travel ban litigation, Trump called the judge who had ruled against the ban, Judge James Robart of the U.S. District Court in Seattle, a “so-called judge.”

When Justice Neil Gorsuch, Trump’s first appointee to the Supreme Court, called such attacks “demoralizing” and “disheartening” during his confirmation process, Roberts did not join in. (Gorsuch’s comments caused Trump to consider rescinding his nomination, The Washington Post reported last year.)

To be sure, Roberts has spoken in general terms about the judicial role. In remarks last month at the University of Minnesota, he addressed what he called “the contentious events in Washington of recent weeks.” He was referring to the confirmation hearings for Kavanaugh.

The chief justice said he feared the public would get the wrong impression from the partisan tenor of the hearings. The Supreme Court, he said, is not a political body and its members work together to interpret and apply the law.

“We do not sit on opposite sides of an aisle,” Roberts said. “We do not caucus in separate rooms. We do not serve one party or one interest. We serve one nation. And I want to assure all of you that we will continue to do that to the best of our abilities whether times are calm or contentious.” In early 2016, just before the death of Justice Antonin Scalia, Roberts bemoaned the politicization of the confirmation process in remarks at New England Law, a private law school in Boston.

“When you have a sharply political, divisive hearing process, it increases the danger that whoever comes out of it will be viewed in those terms,” he said. “If the Democrats and Republicans have been fighting so fiercely about whether you’re going to be confirmed, it’s natural for some member of the public to think, well, you must be identified in a particular way as a result of that process.”

“We don’t work as Democrats or Republicans,” the chief justice said, “and I think it’s a very unfortunate impression the public might get from the confirmation process.”

But Roberts had nothing to say in public about the refusal of Senate Republicans to grant a hearing to President Barack Obama’s nominee to succeed Scalia, Judge Merrick B. Garland. Had he done so, Akhil Amar of Yale Law School said at the time, “that would be a John Marshall moment,” referring to the chief justice most responsible for the Supreme Court’s surpassing stature and central role in American life.

Marshall confronted many challenges, including a clash with President Thomas Jefferson that established the basis for judicial review of congressional action in Marbury v. Madison.

Roberts, by contrast, was called on to address unfocused remarks from Trump lashing out against the 9th U.S. Circuit Court of Appeals, based in San Francisco. Trump said courts in the 9th Circuit always ruled against his policies, and his main point seemed to be that he did not like losing.

“You go to the 9th Circuit and it’s a disgrace,” he said. “And I’m going to put in a major complaint because you cannot win if you’re us.”

“That’s not law,” Trump said. “That’s not what this country stands for.”

Renewing his attack on Twitter on Wednesday, Trump quoted from Roberts’ statement.

“It would be great if the 9th Circuit was indeed an ‘independent judiciary,'” he wrote, “but if it is why are so many opposing view (on Border and Safety) cases filed there, and why are a vast number of those cases overturned. Please study the numbers, they are shocking.”

In a follow-up tweet, he mused about breaking up the 9th Circuit into two or three circuits, a move that would require legislation.

The 9th Circuit hears appeals from federal courts in nine Western states, including two on the Mexican border, California and Arizona. The circuit has a reputation for being frequently reversed by the Supreme Court, but its reversal rate is only a little higher than average and not as high as that of some other circuits. Stuart M. Gerson, a former senior Justice Department official in both Republican and Democratic administrations, said Roberts’ statement was part of a clash between two conceptions of the judicial role.

“The chief justice’s comment punctuates the fact that the administration is doing very poorly before judges appointed by Republicans and Democrats,” Gerson said, “most of whom are acting, not as politicians in robes, but as independent agents of the rule of law.”