Fayetteville, N.C. — Five people died after a wreck on Wednesday in Fayetteville that Police Chief Harold Medlock referred to as the worst crash he has seen in his career.

Authorities said that the incident occurred just after 8 p.m. on Cliffdale Road near Lynhurst Drive.

At least three cars were involved in the crash, and Medlock said witnesses on the scene reported seeing a motorcycle, although one was not found at the scene.

Four people were pronounced dead on Wednesday night; police confirmed a fifth person died on Thursday morning. At least two more were injured in the crash.

"This is the worst crash I've ever seen in my career," Medlock said. "Just very, very horrific circumstances in our city tonight."

Authorities on Thursday released the identities of the three drivers:

» Dadrian Rashad Thomas, 29, of Sandridge Drive, was driving a black Ford Crown Victoria, and he was treated and released from the hospital. 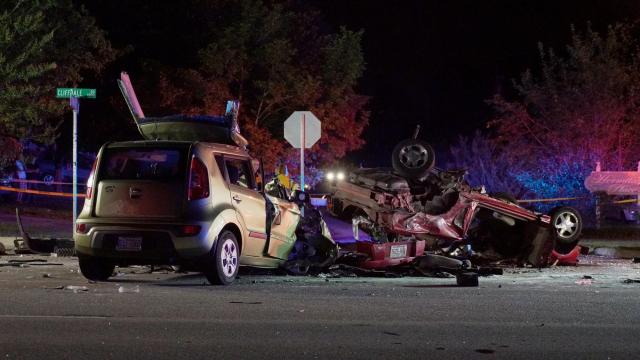 This is the second fatal accident Fayetteville police have responded to this week.

A 17-year-old student at Pine Forest High School died on Sunday when the SUV he was riding in ran off the road and crashed into a tree.