Cheney says she will not resign and GOP shouldn't embrace Trump 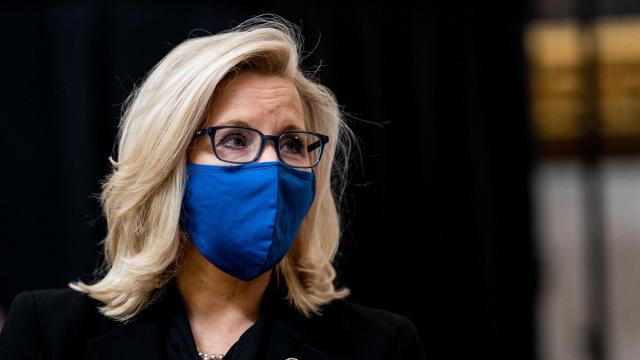 CNN — Republican Rep. Liz Cheney stood her ground Sunday, rejecting her state party's calls for her ouster and denouncing former President Donald Trump, who has sought to turn the GOP against her.

On the heels of a vote by the Wyoming Republican Party to censure her and call for her immediate resignation, Cheney -- the third-ranking Republican in the House -- told Chris Wallace on "Fox News Sunday" that not only will she not resign her seat, but that the Republican Party should "not be embracing the former President."

"We have to be in a position where we can say we stand for principles, we stand for ideals," she said. "Somebody who has provoked an attack on the United States Capitol to prevent the counting of electoral votes, which resulted in five people dying, who refused to stand up immediately when he was asked and stop the violence, that is a person who does not have a role as a leader of our party going forward."

Cheney easily survived a House Republican Conference vote to remain in her leadership spot last week, but she has continued to face backlash from Trump loyalists in her home state, and the censure was just the latest example of a state GOP punishing lawmakers who have bucked Trump.

The Wyoming Republican Party voted Saturday to formally censure the congresswoman for her vote to impeach the former President and stated in its motion that it intends to "withhold any future political funding" from her. The party called on Cheney to repay donations to her 2020 campaign from the state GOP and any county Republican Parties.

"I think you have to read the language of the censure, partly, you know, I think people in the party are mistaken, they believe that BLM and Antifa were behind what happened at the Capitol, that's just simply not the case," she said.

Cheney, just one of 10 Republicans who voted to impeach Trump for his role inciting the riot at the US Capitol on January 6, had said in a statement before she cast her vote that Trump "summoned this mob, assembled the mob, and lit the flame of this attack."

"There has never been a greater betrayal by a President of the United States of his office and his oath to the Constitution," she said at the time.

On Sunday, the congresswoman told Wallace that Republicans "have to make sure that we are able to convey to the American voters, we are the party of responsibility, we are the party of truth, that we actually can be trusted to handle the challenges this nation faces like Covid, and that's going to require us to focus on substance and policy and issues going forward, but we should not be embracing the former President."

House Republicans last week voted 145 to 61 in favor of keeping Cheney on as conference chair after she defended her support for impeachment during a contentious closed-door conference meeting.

Despite the pressure from within her conference, Cheney previously told CNN she "absolutely" does not regret her impeachment vote, and she defended it again Sunday.

"I think people all across Wyoming understand and recognize that our most important duty is to the Constitution," she told Wallace.

"And as I've explained, and will continue to explain to supporters all across this state, voters all across this state, the oath that I took to the Constitution compelled me to vote for impeachment, and it doesn't bend to partisanship. It doesn't bend to political pressure. It's the most important oath that we take. And so I will stand by that, and I will continue to fight for all the issues that matter to us all cross Wyoming."

This story has been updated with additional details Sunday.