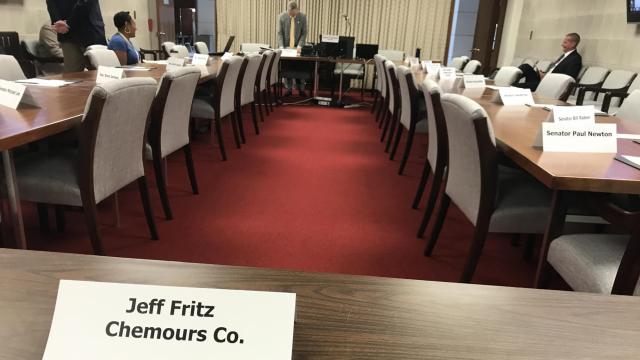 Raleigh, N.C. — Chemours officials declined to participate in a public hearing Tuesday about compounds the company released into the Cape Fear River for years, asking instead to meet in private with Sen. Trudy Wade, R-Guilford, the chair of a Senate committee studying the issue.

Company officials did meet behind closed doors Tuesday with environmental regulators in Gov. Roy Cooper's administration, something Wade announced during her committee's hearing and which the administration later confirmed. The two sides discussed their ongoing legal dispute and the court order state officials won last month to block Chemours from discharging chemicals into the river.

"Regulatory staff and attorneys have continued to meet with company representatives to gather outstanding information for their investigation as required in the court action," state Department of Environmental Quality spokesman Jamie Kritzer said in an email. "They will continue to seek information about emissions and groundwater testing."

Kritzer said there was no news to report out of Tuesday's meeting, which involved company officials and their legal counsel.

A Chemours spokesman did not respond to a WRAL News email seeking comment. Not only is the company facing inquiries from the state's environmental and health regulators, but subpoenas indicate that a U.S. Department of Justice investigation is also underway.

Wade's committee, in an agenda unavailable until just minutes before the meeting began, listed Chemours lobbyist Jeff Fritz as the afternoon's first speaker. Staff had a placard announcing Fritz's anticipated presence sitting on a table facing committee members, but once Wade called the meeting to order, she announced no one from the company would attend.

Wade said she didn't speak personally to company representatives, but her office was told the meeting with administration officials precluded appearing before her committee.

The open discussion would have been a rare one for Chemours, which has typically avoided public comment as state, local and federal officials, along with media and members of the public, question discharges from the company's facility on the Cumberland-Bladen county line.

Cooper vetoed that bill, which combined $435,000 to study chemicals in the river with a hodgepodge of other environmental regulatory language, including changes for landfills and an end to the state's ban on selling plastic grocery bags on the Outer Banks.

Cooper had asked for about $2.6 million, and he dismissed the lower amount as an unserious response. He also wanted funding to go to the state's environmental and health agencies; GOP leaders earmarked their funding for the Cape Fear Public Utility Authority and the University of North Carolina at Wilmington, which is studying chemicals found in area drinking water.

Republican legislators have always said more funding would be forthcoming, and they pushed officials from the public utility and the university Tuesday on whether a state funding delay would set back their efforts.

Officials said they need the money but that their research into GenX and other poorly understood chemicals found in the river is too important to delay over reimbursement concerns. Wade said she hopes the legislature will override Cooper's veto when it comes back into session Wednesday.

There was also discussion Tuesday about building a database that water utilities, and potentially the public, could use to get a rundown of compounds found in area water. This information may be included now in required state permits, but it is not cataloged publicly online, and notifications don't automatically flow from state or federal regulators to local water system operators.

The state's health department has said repeatedly that the water in and around Wilmington is safe to drink, but concerns remain because the family of chemicals involved has not been fully studied and precursor chemicals have been tied to cancer in animals.

At least one of those rooms, though, was vacant during Tuesday afternoon's proceedings.