Chefs, growers team up for Farm to Fork Picnic 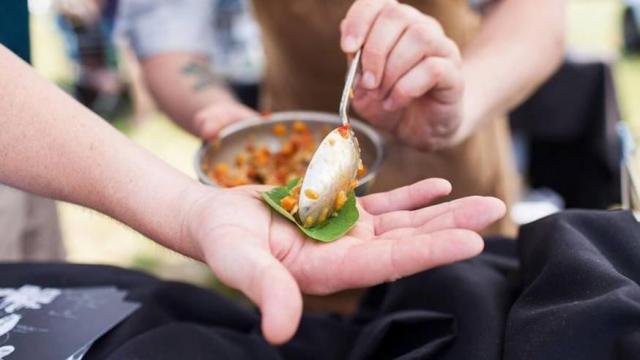 Pittsboro, N.C. — Early in his kitchen career, Thomas Card envied the chefs who cranked up the creativity for the small bites served at the annual Farm to Fork Picnic, which will be held June 3 at Fearrington Village.

“It was always one of the biggest things I wanted to do,” says Card, now executive chef at the acclaimed Counting House restaurant in the 21C Museum Hotel in Durham. “Now, it’s something I look forward to every year. I really enjoy being part of this great, caring community of chefs and farmers.” 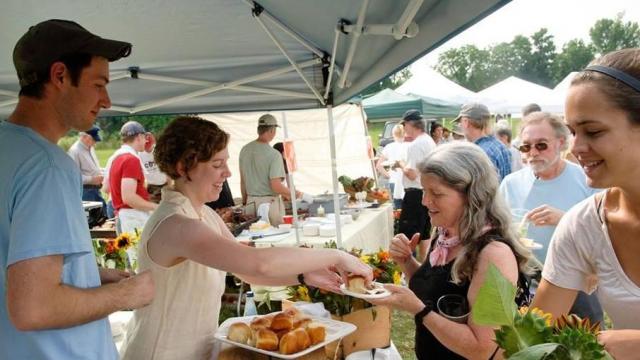 The Farm to Fork Picnic is marking its eleventh year as a primary fundraiser for the training of new farmers at the Center for Environmental Farming Systems in Eastern North Carolina and the W.C. Breeze Farm Incubator in Orange County.

About 36 restaurants and local growers are paired to present tastings that spotlight Triangle and Piedmont grown or produced ingredients, and many more craft makers will be offering beer, wine and assorted nibbles.

Card is partnering with Prodigal Farm of Rougemont, which makes a variety of goat’s milk cheeses. He’ll be using their Field of Creams, which is subtly flavored with woodland aromatics in the rind.

“We’re going to take a playful approach to tacos. I don’t know anyone who doesn’t like a good taco,” says Card, who plans to stuff his with smoked barbecue chicken. “We’ll use the Field of Creams in place of the waxy, Cheeze Whiz-type cheese you normally expect.”

Phoebe Lawless of The Lakewood in Durham has participated in each of the previous 10 Farm to Fork Picnic events, starting with what was planned as a one-off celebration to mark the visit of Carlo Petrini, founder of the Slow Food movement.

While the multiple James Beard Award nominee could have her pick of partners, Lawless likes to let the Farm to Fork steering committee choose the farm with which she collaborates. This year it’s Fickle Creek Farm of Efland. She’ll be using their lamb to create a köfte, small Turkish meatballs served on whole wheat flatbread and topped with housemade yogurt.

“We’ll also bring something sweet, but I haven’t quite finalized that yet,” says Lawless, who previously represented her now-closed Scratch bakery. “It most likely will involve honeysuckle, as we have gallons of syrup to use.”

Sean Fowler, chef/owner of Mandolin restaurant in Raleigh, is a member of the steering committee that connects chefs and growers. He often claims a producer without a requested partner. This year he’s happy to work with Ran-Lew Dairy of Snow Camp, which provides cow’s milk products for his restaurant.

“We’ve been using their buttermilk since I found out about it four years ago,” says Fowler, who relies on it for tender fried chicken and flavorful crème fraiche.

Fowler doesn’t typically prepare a dessert for the Farm to Fork Picnic, but he was inspired to create a Drumstick-style mini ice cream cone.

“It’s one of the joys of my job to find creative ways to turn leftovers or excess product into something delicious,” he explains. “We do a caramel cake that is one of our signatures and we always serve it with buttermilk ice cream. We thought, it’s always a hot day, and ice cream would be fun.”

Fowler’s team will make cones from thin tuile cookies and fill them with a dollop of pink peppercorn caramel. A scoop of buttermilk ice cream will be coated with Raleigh-made Vidieri chocolate and sprinkled with Anson Mills heirloom benne seeds. “We’re going for a fun, local take on a Good Humor ice cream truck,” says Fowler, who plans to bring around 600 of the treats.

“It’s a taste of nostalgia but in a great new way.”

Farm to Fork is extending its fundraising schedule throughout the growing season this year. On Sept. 16, a pop-up dinner featuring Jacob Boehm of Chapel Hill’s Snap Pea Underground & Catering will be held as a secret Triangle location to be announced. And on Dec. 6, Southern Foodways Alliance founder and director John T. Edge will be featured at the Celebration of Southern Food, to be prepared by six prominent chefs at Lavender Oak Farm in Chapel Hill.

Edge is the author of “The Potlikker Papers: A Food History of the Modern South.”

For tickets, or to learn more about all Farm to Fork events, visit farmtoforknc.com.