Cheer, Cheer for Old Notre Dame All the Way in Staten Island 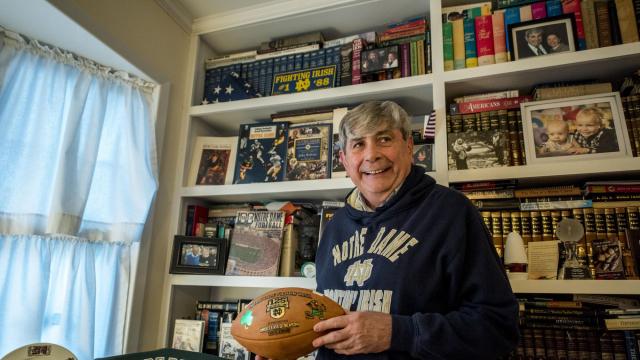 NEW YORK — Peter Mulroy is loyal to the University of Notre Dame’s football team, which won one for the Gipper in the 1920s and is undefeated this season as it practices for Saturday’s game against Syracuse University at Yankee Stadium.

The basement in Mulroy’s house, on Staten Island, is a shrine to the team, with banners and photographs celebrating the Fighting Irish. He talks proudly about once high-fiving Rudy Ruettiger, the former Notre Dame walk-on famous for sacking a quarterback during the final seconds of the only game of his college career. Ruettiger’s story was the basis of the 1993 movie “Rudy.”

It is no coincidence that Mulroy’s Shih Tzu is named Rudy.

It is no wonder that Mulroy’s wife, Linda, says, “I feel like my whole world revolves around Notre Dame.”

But Peter Mulroy never graduated from Notre Dame. He did not even attend Notre Dame.

Mulroy, a retired New York City police detective, is what Notre Dame calls a “subway alum,” someone who roots for Notre Dame but does not have a Notre Dame diploma. The term “subway alums” was coined a century ago, when Notre Dame played some away games in New York. Now Notre Dame uses the term for people who are not graduates of the school but are involved in alumni affairs nationally, including those in places that do not have subways.

The University of Notre Dame Club of Staten Island has 43 members who graduated from the school, “but our total membership is over 160 because of guys like me” and parents of undergraduates, said Joseph Delaney, a former club president who graduated in 1967 from Seton Hall University, which has not had a varsity football team since 1981.

Notre Dame’s president, the Rev. John I. Jenkins, said fans who did not graduate from the school but who go to Notre Dame tailgate parties and games, collect Notre Dame memorabilia and conduct community service projects are “unique.” Subway alums are so important to the school that Delaney was recently named the first non-alumnus on Notre Dame’s alumni board of directors.

“I’ve seen schools like Texas or Michigan that are larger and nationally known that have fan bases,” said Chase Carter, president of the Council of Alumni Marketing and Membership Professionals who is also an official at Oklahoma State University’s alumni association. “But nothing like this.”

The rise of the subway alums coincided with Notre Dame’s desire for its football team to be recognized nationally, which is why it scheduled games in New York.

But there was more to Notre Dame during that era than football. The team’s fame “coincided with the immigrant wave and an anti-immigrant attitude and a little bit of anti-Catholic attitude,” Jenkins said. “It became the team of this immigrant population, this group that was new to this country.” Also, he added, “Notre Dame scored a few stunning upsets. That helped.”

Jenkins said his father hooked him on watching Notre Dame games when he was growing up in Nebraska. “It became your identity,” he said. “Your teams when you’re 13 are the teams you root for, for life. It’s associated with memory, family, coming together. It has this resonance that goes beyond the sport.”

For many around the country, Notre Dame represented something bigger than a school or team. “My dad was an Irish-Catholic blue-collar man who took great pride in what Notre Dame stood for,” Delaney said. “It was a matter of pride to my dad that the football players graduated, became doctors, became lawyers and some of them became clergy, but Notre Dame football gave them entry into the American mainstream. Guys like my dad who didn’t go to college identified with that.”

Once, he and his partner, while off duty, went to a Giants-Jets game and heard the Notre Dame fight song among the tailgaters in the parking lot. The two ended up joining the tailgate and were introduced to Joe Nagy, the sheriff of St. Joseph County, Indiana, home to Notre Dame.

New York has produced more than subway alums for Notre Dame, of course. “The first-ever Notre Dame Heisman Trophy candidate was from Staten Island,” Delaney said. “William Shakespeare. I kid you not. Notre Dame’s quarterback in 1935. He finished third in the Heisman Trophy. And you know what? He was a Protestant.”

Mulroy has attended home games in Indiana, making friends with tailgaters from South Bend and reciprocating, with help from a caterer, when Notre Dame played in the New York area and Fighting Irish fans came east. Mulroy’s daughter Cara, who went to Catholic University in Washington and now lives in Austin, Texas, also cheers on Notre Dame.

“Her fiance’s not too crazy about it,” Mulroy said. “He’s a UT fan” — the University of Texas — “and she follows the Irish. They’re all over the place, subway alumni.”