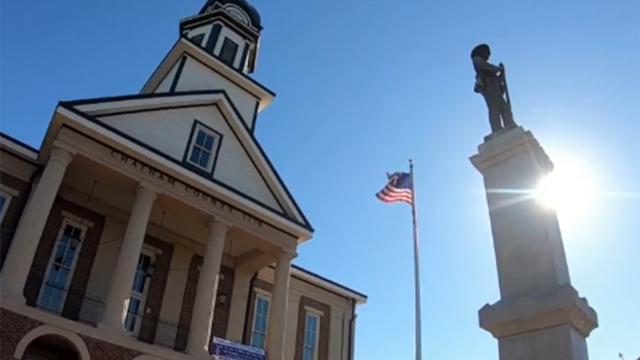 Pittsboro, N.C. — A Superior Court judge on Wednesday denied an injunction that the United Daughters of the Confederacy wanted to keep a Civil War monument outside the Chatham County Courthouse.

After the ruling, a Chatham County commissioner said officials would proceed "with reasonable haste" to remove the monument.

The Board of Commissioners voted in August to move the statue, which has stood outside the iconic courthouse in Pittsboro since 1907.

Commissioners gave the local UDC chapter until October to come up with a plan for its future. When no plan was submitted, commissioners said they would declare the statue and pedestal "a public trespass" on Nov. 1 and begin removing it.

But the UDC filed suit to block the move, and a judge granted a temporary restraining order on Oct. 28.

That restraining order has expired, and Judge Susan Bray refused to block the county from taking action any further.

"I think it will happen fairly soon," Commissioner Karen Howard said of the monument removal. "The plan is to do it in an expedient way but in a way that is safe and does not interfere with activity around the circle."

Both Barbara Push, president of the UDC chapter that filed suit, and the group's attorney, James Davis, declined to comment after the court hearing.

The UDC's lawsuit must still be resolved, but Howard and Nick Ellis, an attorney for the county, said they think chances are slim that officials would have to return the statue to the courthouse in the future.

"If the plaintiffs were to ultimately prevail – and that would include a finding that the county owned the monument, that would also have to include a decision that the statute that requires it to remain is found to be constitutional – if all of those things happen, then, yeah, the monument may be able to go back up," Ellis said.

The UDC has argued that the county owns the monument and, as such, it cannot be moved under a 2015 state law governing such public monuments. County officials maintain the UDC still owns the statue, making private property on public land.

"I think there is, of course, a slim risk of [losing the lawsuit], but I think that we’re fairly confident that we are on the side of right and that we are fully justified in removing it at this stage," Howard said. "I think we would be remiss if we were to stall at this point in anticipation of something that may not happen."

The county's motion to dismiss the lawsuit is scheduled to be heard Dec. 2.

The monument has been the site of frequent protests and counter-protests in recent months, leading to numerous arrests.

Carl Thompson Sr., a former county commissioner and a member of the West Chatham NAACP and Chatham for All, said he was pleased that the monument might soon be gone.

"We understand what the statue represents, especially as the African-American community," Thompson said. "That statue and the institution that it represents do not speak for the majority of people of Chatham County now. On that argument alone, it shouldn’t be there."

Davis, the UDC attorney, disputed that position during the court hearing.

"It stands there and honors people," he said of the monument. "It doesn’t degrade people. The only degrading it does is in the minds of those who want it to be degrading."