Charles White Was a Giant, Even Among the Heroes He Painted 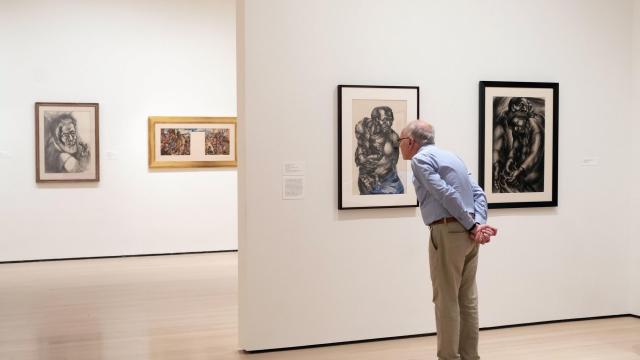 NEW YORK — What a beautiful artist Charles White was. Hand of an angel, eye of a sage. Although White, who died in 1979, is often mentioned today as a teacher and mentor of luminaries like David Hammons and Kerry James Marshall, his is no case of reflected glory. In “Charles White: A Retrospective” at the Museum of Modern Art, from beginning to end, he shines.

The survey of over 100 paintings, drawings and prints runs on two parallel tracks. It gives the first full-scale look at White’s career in 30-some years, concluding with his most complex and adventurous work. And, through his politically vigilant art, it traces the broad pattern of African-American life through three-quarters of the 20th century.

White was born in 1918 on Chicago’s South Side to a black domestic worker who had migrated from Mississippi, and a Pullman car porter of Native American decent. His mother raised him alone and, in a time before day care, regularly deposited him at the main branch of the Chicago Public Library when she was on a job. There, in the protective care of staff members, he pored over illustrated books and began to draw.

And he kept drawing, in elementary school and beyond. At 13, he won a scholarship for Saturday classes at the School of the Art Institute of Chicago, where he wandered the galleries, soaking in a history of Western figurative painting and noticing that few of the figures looked like him. At 16, he started exhibiting with the Art Crafts Guild, a group that contributed to what would be called the Black Chicago Renaissance. With them he learned what it meant to be a contributing member of a creative community, a role he cherished.

In 1937, after two art schools turned him down upon learning he was black, he enrolled full time at the School of the Art Institute. Within a year he was hired as a painter by the Works Progress Administration, the WPA.

He came to the work as a critical looker and thinker. The dominant public images of black people in American culture were, he said, “a plague of distortions,” comedic or abject. He rejected them. His 1939 oil-on-canvas WPA mural called “Five Great American Negroes” is installed just outside the exhibition galleries. And its portraits of Sojourner Truth, Booker T. Washington, Frederick Douglass, George Washington Carver and Marian Anderson begin the show on a heroizing note, one that sounds throughout, although not always in the key of uplift.

Anger was a motivating force in White’s art. In 1940 he said: “Paint is the only weapon I have with which to fight what I resent.” He would find plenty to fight in the history he was living. His 1940 study for a never-executed mural called “Struggle for Liberation (Chaotic Stage of the Negro, Past and Present)” includes an image of a lynching. A 1946 drawing, “The Return of the Soldier (Dixie Comes to New York),” illustrates the segregationist violence visited on black veterans of World War II. (White was one, discharged from the Army when he contracted what would become chronic tuberculosis.)

His monumental 1964 ink and charcoal drawing “Birmingham Totem” is a response to the bombing, the previous year, of the 16th Street Baptist Church in Birmingham, Alabama, in which four young black girls were killed. Much of this nearly 6-foot-tall piece is an image of ruin, a mountain of splintered boards and shattered glass. But atop the pile sits a young, nude black man, an architect of the future, who is already sorting through the debris and starting to rebuild.

Agency, the power to generate action and self-definition, was the crucial element White brought to the black figure. It’s there in the pumped bodies of his moody postwar work. And it irradiates large-scale drawings like “Preacher” (1952), for which Paul Robeson, a leftist ally and personal friend, was the model. A 1951 painting called “Our Land” gives a nod to Grant Wood’s “American Gothic” — owned by the Art Institute of Chicago — and transforms it. White replaces Wood’s pale, dour farm couple with the frame-filling form of a single black woman, her skin a spectrum of harvest colors, gold and brown. By the time this painting was done, White had married and been divorced from artist Elizabeth Catlett, with whom he had lived a socially and politically networked life in New York City. He had also spent time in Mexico where he met Diego Rivera and David Alfaro Siqueiros, and participated in the Taller de Gráfica Popular, a graphic collective in Mexico City.

His stay there strengthened his desire to make art that would be available to a wide, nonelite audience. Lithography, basically a form of reproducible drawing, became a primary medium. And back in the United States, his experience of the growing black civil rights movement — and a brush with the House Un-American Activities Committee — reconfirmed the impulse to keep his work political.

In 1956, by then married to Frances Barrett, a white social worker, he had a severe recurrence of tuberculosis and moved, on the advice of his doctors, from New York to Los Angeles. There his ideal of keeping the audience for his art broad took a new twist: He started designing graphics for films, and a new friend, Harry Belafonte, used his message-driven images in a television special. Maybe more important, White started teaching, in local community art centers and, beginning in 1965, at what is now Otis College of Art and Design.

His commitment to an activist art never wavered. In 1970 he was a founding member of the Committee of the Arts to Free Angela Davis, and a poster he designed and contributed on her behalf became one of his best-known images, “Love Letter I.” (It was the catalog cover for the 2011 exhibition “Now Dig This! Art and Black Los Angeles 1960-1980.”) And if, with the advent of the Black Power movement, his work to some eyes looked tame, it did not look that way to observers like Hammons and Marshall, who found in him an expansive example of what “black artist” could mean.

Teaching seems to have led White to rethink his own art, to experiment with it technically and complicate its content. In the last phase of his career, he devised an oil-wash technique that merged painting and drawing in semiabstract layers of images, words and patterns. With it, he produced an extraordinary series of pictures called “Wanted Posters,” which placed contemporary African-American life in the framework of 19th-century slave narratives. And he created an astonishing stand-alone work, “Black Pope (Sandwich Board Man).”

Inspired by a 1960s photograph of a city street preacher by photojournalist Leonard Freed, White depicts a black man wearing heavy robes, aviator glasses and cruciform headdress. A placard with the single word “now” hangs from his neck. He holds his left hand out in a gesture that could be a benediction or a peace sign. Behind him, as if imprinted on a vertical banner, is a kind of X-ray outline of the lower half of a human skeleton. High above, as a ghostly blur, floats the stenciled word “Chicago.”

Although you can interpret individual details of the image — a reference to White’s birthplace, to mortality, to a black identity that embraces militancy, spirituality and righteousness — its full meaning is elusive, and maybe that’s the point. Mystery is the point. The show’s organizers — Esther Adler, an associate curator at MoMA, and Sarah Kelly Oehler, chair and curator of American art at the Art Institute of Chicago — position the piece as an exhibition centerpiece, under spotlights. And it holds a similar place in my own pantheon of great American art images. Grace, passion, coolness, toughness, beauty — like its creator, it has them all.