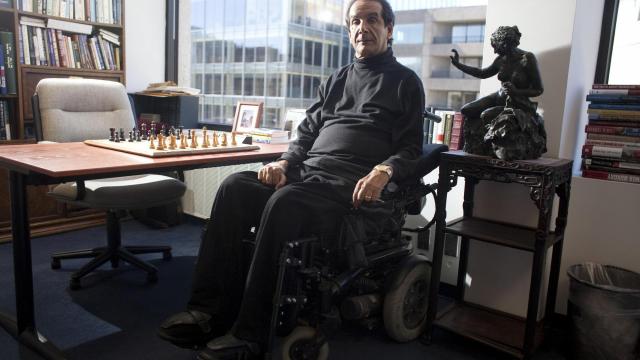 Charles Krauthammer, a former psychiatrist and self-described Great Society Democrat who metamorphosed into one of the nation’s most cogent conservative voices as a Pulitzer Prize-winning columnist and television commentator, died Thursday. He was 68.

The Washington Post, where his weekly column had appeared since 1985, reported the death, quoting his son, Daniel, who said the cause was cancer of the small intestine. The Post did not say where he died.

On June 8, explaining what he called his 10-month “uncharacteristic silence,” he revealed in The Post that despite surgery for a stomach tumor last August, cancer had recurred and that he had only weeks to live.

“This is the final verdict,” he wrote. “My fight is over.”

While Krauthammer continually extolled Ronald Reagan (he ranked him No. 2 among 20th-century presidents, behind Franklin D. Roosevelt) and belittled Barack Obama’s record, he could criticize his fellow neoconservatives and Republicans just as fiercely as he skewered liberal Democrats.

Aligning himself with most conservatives, Krauthammer was gung-ho about going to war with Iraq in 2003, arguing for replacing Saddam Hussein with a democratic government, and he expressed few compunctions about torturing suspected terrorists.

But he also took a more liberal line in favoring the continued legalization of abortion, looser restrictions on stem cell research, abolition of the death penalty and, as an avowed Zionist, a two-state solution to the conflict between Israel and the Palestinians.

In sum, he was “independent and hard to peg politically,” said Meg Greenfield, his editor at The Post for many years.

Krauthammer would marshal his arguments with logic rather than bombast and deliver them with polished prose.

Known as an accomplished wordsmith, he originated the phrase “the Reagan Doctrine” for the president’s strategy toward the communist threat — of going beyond the policy of containment to actively encourage anti-communist insurgencies. He coined the term “unipolarity” to describe the era after the fall of the Soviet Union in 1989, envisioning the United States as dominating it. And he diagnosed as “Bush Derangement Syndrome” the response many people had to the policies, the presidency and even the very existence of George W. Bush.

“Few could disagree that he wrote a column of breathtaking range and intelligence and integrity,” The Post said in an editorial after Krauthammer had announced his cancer prognosis.

He had other passions — including baseball and chess (which he finally gave up, he said, because it had become an addiction). But he concluded that everything else in an era of nuclear proliferation was subordinate to politics.

“You can have the most advanced and efflorescent of cultures,” he wrote in the introduction to his memoir, “Things That Matter: Three Decades of Passions, Pastimes and Politics” (2013). “Get your politics wrong, however, and everything stands to be swept away. This is not ancient history. This is Germany 1933.”

His parents were not overtly political, he said, but his worldview was shaped in part by the Holocaust.

“It gives you a vision of the world which I think is more restrained, conservative,” he told interviewer Brian Lamb on C-SPAN in 2005. “You don’t expect that much out of human nature.”

Nor out of divine providence. “I don’t believe in God,” he said, “but I fear him greatly.”

Krauthammer was born March 13, 1950, in Manhattan to Orthodox Jewish immigrants. His father, Shulim, a lawyer who spoke nine languages, came to New York from Ukraine through France and Cuba, where he met Thea Horowitz, who would become his wife. She had left Belgium the day the Germans invaded, May 10, 1940, and later translated U.S. military manuals for the Free French army.

The family moved to Montreal when Charles was 5 but would return to New York to summer in Long Beach.

Enrolling at McGill University in Montreal, he was elected editor of the student newspaper after participating in a coup against what he described as its Maoist management.

Campus radicalism, he wrote in his memoir, left him “viewing certainty with suspicion and acknowledging, with both regret and resolve, the imperfectability of man, the fallibility of institutions and the tragic — rather than redemptive — nature of history.”

When he graduated in 1970 with a degree in political science and economics, he was still undecided on a profession.

Following in his older brother’s footsteps to please his parents, he applied to medical school and was accepted by Harvard. But he deferred admission and enrolled instead in a political philosophy regime (his favorite was John Stuart Mill) at Balliol College at Oxford. There he met Robyn Trethewey, a fellow student from Australia, whom he would marry.

She and their son, Daniel, survive him. A complete list of survivors was not immediately available.

After a year or so, Krauthammer found political theory too abstract. He called Harvard and was told that an incoming student had just dropped out. He seized the opening.

“I grabbed a toothbrush, I got on a plane and left, and that’s how I decided to become a doctor,” he said.

He decided to specialize in psychiatry, he said, because “I was looking for something halfway between the reality of medicine and the elegance of philosophy.”

After skipping class one morning to play tennis, he paused to cool off in a campus pool. On his last dive off a springboard, his head hit the bottom. With only one year of medical school under his belt, the 22-year-old Krauthammer could diagnose the injury and predict the consequences.

The blow had severed his spinal cord, leaving him a quadriplegic, paralyzed from the neck down, with only partial use of his arms and hands — a condition unknown to most television viewers, because he was usually seen on camera seated behind a desk, his wheelchair out of sight.

As he was taken to the hospital after the pool accident, medics left behind two books that Krauthammer had been carrying: “The Anatomy of the Spinal Cord” and Andre Malraux’s novel “Man’s Fate.”

Tutored at his bedside during a 14-month hospitalization, he managed to graduate on time and get his medical degree, and he resolved to go on as best he could. “I’m not going to defy gravity,” he said in 2013 on a Fox News special titled “A Life That Matters,” “but on the big things in life, that wouldn’t change at all.”

Despite his dim view of human nature, he tried to remain optimistic, but he acknowledged that there were few upsides to his disability. “Parking is easier,” he said, “and that’s about it.”

In 1978, after a former professor of his at Harvard recruited him to join the Carter administration at the National Institute of Mental Health in Washington as a research director, he simultaneously began getting articles about politics published in The New Republic.

Soon he was so smitten with Washington that he abandoned medicine and, on the basis of his political essays, was recruited to write speeches for Vice President Walter Mondale, who was running for re-election with President Jimmy Carter.

Krauthammer began working for The New Republic full time in 1981, on the day Reagan was inaugurated.

“When a young journalist asks me today, ‘How do I get to be a nationally syndicated columnist?’ I have my answer,” he said. " ‘First, go to medical school.'”

By then the underpinnings of his politics had already begun to shift. And, unable to reconcile his personal loyalty to Mondale with his political conversion, he did not vote for president in 1980. It was, he said, the only time he failed to do so. (In 2016, he said he would cast his ballot for a third-party candidate because of his disdain for both Hillary Clinton and Donald Trump.)

Krauthammer wrote regularly for The New Republic from 1981 to 2011 and also for Time magazine from 1983 to 2018. He was a panelist on the PBS program “Inside Washington” from 1990 to 2013 and a nightly panelist on Fox News Channel’s “Special Report With Bret Baier” for the past decade.

Krauthammer had been a Cold War liberal on foreign policy but came to believe that Reagan’s aggressive doctrine had succeeded in pushing the Soviet Union toward collapse. It was not so much that he had moved to the right of the Democratic Party, he said; rather, it was the Democrats who had abandoned him, by moving farther left in the 1970s. On domestic policy, he concluded that the welfare state had failed.

“As a doctor, I’d been trained in empirical evidence,” he said. “If the treatment is killing your patients, you stop the treatment.”

But regardless of which party held power at any given time, he said, his faith in the American system abided.

“The perennial question that has preoccupied every political philosopher since Plato — what is the best form of governance? — has been answered,” he wrote in 1989. “After a few millennia of trying every form of political system, we close this millennium with the sure knowledge that in liberal, pluralist, capitalist democracy we have found what we have been looking for.”

Krauthammer won the Pulitzer Prize for commentary in 1987 for his Washington Post columns as well as awards from organizations that spanned the political spectrum, from the liberal People for the American Way to the conservative Eric Breindel Foundation, named for the former editorial page editor of the New York Post. In 2005, President George W. Bush followed Krauthammer’s published advice when he withdrew the Supreme Court nomination of his White House counsel, Harriet E. Miers, after she was criticized as unqualified. Bush saved face by saying her opinions as counsel were protected by executive privilege and could not be shared with the Senate in any confirmation hearings.

The next year, the Financial Times called Krauthammer the most influential commentator in America. Krauthammer said he found all that influence worrisome.

“The reason,” he said, “is that when I was totally unknown, I could say anything I damn well please.”

Which subject had generated the most feedback from readers? “Well, if you write about dogs,” he replied, “you’re guaranteed to get enormous reaction.”

Krauthammer’s book includes a column about Rick Ankiel, a pitching phenom for the St. Louis Cardinals. During one inning of a pivotal playoff game in 2000, the 21-year-old Ankiel walked four batters and threw five wild pitches. He was banished to the minors for five years, survived injuries, but gave up pitching altogether. He fought his way back to the Cardinals as an outfielder and, in 2007, sealed a game with a three-run homer and two days later hit two more home runs and made a spectacular catch.

That column, on the value of resilience, appeared in a section of the book called “Personal,” but Krauthammer never mentioned himself. Instead, he invoked the hero of Bernard Malamud’s “The Natural,” Roy Hobbs, a baseball prodigy who attempts a belated comeback after being shot.

“No one knows why Hobbs is shot,” he wrote. “It is fate, destiny, nemesis. Perhaps the dawning of knowledge, the coming of sin. Or more prosaically, the catastrophe that awaits everyone from a single false move, wrong turn, fatal encounter. Every life has such a moment. What distinguishes is whether — and how — we ever come back.”