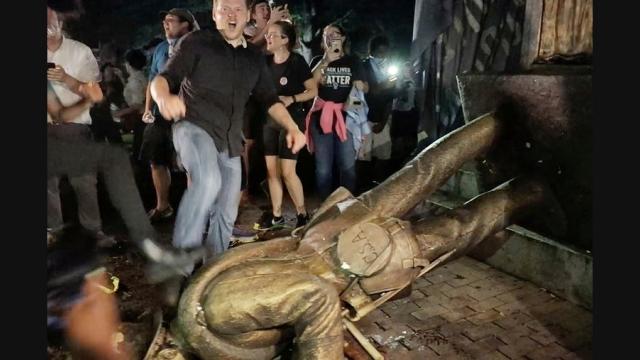 Protesters knocked the "Silent Sam" statue off its pedestal on McCorkle Place on Aug. 20, and more than 20 supporters and critics of the statue have been arrested in several demonstrations since then.

The UNC Board of Governors gave UNC-Chapel Hill officials until Nov. 15 to devise a plan for the future of Silent Sam – it has been stored in a secure location since its toppling – and Chapel Hill Mayor Pam Hemminger and members of the Town Council said they want their position to factor into that effort.

"We are writing to reaffirm Chapel Hill's earlier request for the expeditious and permanent relocation of the Silent Sam Confederate monument from its location in McCorkle Place to a more contextually appropriate place that is safer for public viewing," town officials wrote in the letter.

Town officials said the statue not only is "an offense to the entire Chapel Hill community," the frequent clashes over it pose a threat to public safety, harm the town's reputation and business community and strain the town's resources because Chapel Hill police are usually called to help with crowd and traffic control during the protests.

"We appreciate your leadership in working with the UNC Board of Governors to open the door for UNC to explore alternatives for the Silent Sam monument and believe our request aligns with the objectives spelled out in their August 28th resolution," the Town Council's letter reads.

The Town Council first requested that Silent Sam be moved from McCorkle Place more than a year ago in the wake of a violent clash between white nationalists and counter-protesters over Confederate statues in Charlottesville, Va.

UNC-Chapel Hill has created a dedicated email, uncmonument@unc.edu, for people to submit ideas for Silent Sam's future for officials to consider as they develop the plan to submit to the Board of Governors.