The Chapel Hill Public Library currently charges people 25 cents a day, up to a maximum of $5, for keeping checked-out books past the return date. But the library's advisory board said in a recent petition to the Town Council that ending overdue fines is a matter of equity.

"[W]hile the initial motivation for library fines was well-considered, over time, those same fines have become a barrier to equal access to library materials," the petition states. "Fines have a disparate effect on citizens who are socioeconomically disadvantaged, by limiting borrowing privileges and access to those who cannot pay overdue fines."

Late fees brought in about $50,000 during the 2018-19 fiscal year, officials said, calling it a "meager portion" of the library's annual budget. The petition also notes that fine revenue has been falling for several years.

"Cities moving to the fine-free model are seeing a neutral financial impact, along with increases in circulation and library usage, as well as an improvement in the morale of library staff," the petition states. 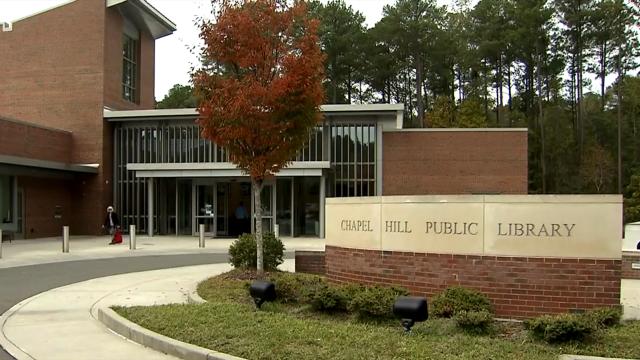 Some local residents agree that it's time to close the book on library fines.

"Everybody has that story of the book you forgot and the library fees. Sometimes it can be hard to come back to the library because you know you have that fee waiting there," Heidi Allen said. "Just let people borrow the books and bring them back. That’s more important, I think, than the fees they’d be getting."

"I think it’s so important for us to be reading to our kiddos at an early age. Having something like the fines get in the way of that would just be sad," Colie Porter said.

But Kim Jones, a Carrboro resident who said he uses the Chapel Hill library regularly, wonders whether books will disappear from the shelves if there's no incentive to bring them back.

"If you don’t have any more fines, does somebody just take a book and keep it for four weeks or something like that?" Jones asked. "Many of the books that I look for here, you have to put them on hold because someone else has them. If there were no fines or anything, I may never see those books."

The Town Council is expected to consider the petition to eliminate fines from the 2020-21 budget next week. Members could approve or reject it or ask staff to do more research before they make a decision.