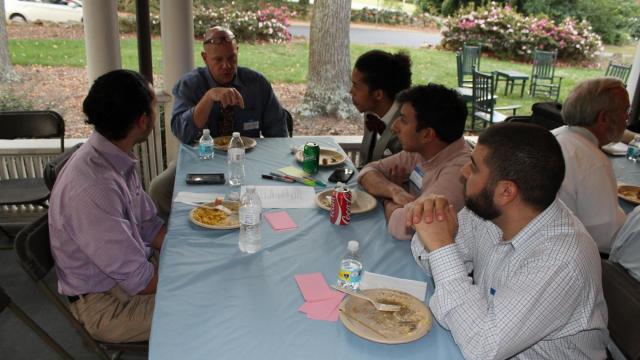 Aisha Anwar remembers when she attended a campus lecture last year as a UNC-Chapel Hill sophomore. She was one of the only Muslims in the crowd. The guest speaker gave a talk about Catholicism, and then touched on Islam.

“And concluded with some really, you know, I would say intellectually irresponsible conclusions,” she says.

Anwar says the speaker argued that Islam doesn’t have a narrative and suggested that it’s not compatible with democracy.

“And this is all coming from a man who’s studied Sharia. He studies this. He teaches this, which is even more upsetting in my opinion because it’s like 'what are you telling your students?'” Anwar says.

Anwar, who wears a hijab, explains that the speaker eventually looked straight at her and asked if she had anything to add. She challenged some his points, but says it felt like a hostile environment. She explains that she felt singled out and put on the spot to speak on a topic much larger than herself.

While he may have not used racial epithets or slurs, Anwar says he used jargon and academic speak to push his “oppressive views.”

And it’s those kinds of experiences that Anwar says wear her down.

“We’re exposed to this on a daily basis,” she says. “You go on Facebook , you go just to check the news for a brief moment and you’re bombarded by what kind of communities are actively pushing against your existence. That’s a lot to bear every single day.”

Chapel Hill town leaders say they want to understand that and help. They decided to get more active after the fatal shootings of Razan Abu-Salha, Yusor Abu-Salha and Deah Barakat on Feb. 10.

Craig Hicks, a neighbor, was charged with murdering the three young Muslims in their home – an act that shook the community and resonated around the world.

Many people saw it as a clear hate crime. But early on Chapel Hill police came out with a statement that said the shooting appeared to have been motivated by an ongoing parking dispute. Eight months later, Police Chief Chris Blue has had time to reflect on that statement.

“I think if we had to do it over again, understanding the overlay of emotions, we probably would’ve shared information differently,” Blue says.

Blue says the facts wouldn’t have changed, but he would’ve said less. He says he understands how the parking dispute comments felt dismissive, presumptuous and insulting to many Muslims – though that wasn’t the intent.

“Sometimes the first thing you say are the things that stick in everybody’s mind,” he explains. “And this was clearly a case, and I’m really sorry that what was intended to be informational in some ways distracted people from their need to grieve and work through a tragedy.”

Chief Blue has been an active leader in trying to engage and build stronger relationships with Muslims in Chapel Hill. He’s part of a steering committee that began meeting in March, after the shooting.

The group is made up of about a half-dozen community members who are brainstorming strategies to create a more inclusive environment. They want to educate the public and engage with Muslim students and residents, like Shane Atkinson.

“I started a cyber community on Facebook. It’s called the Society of Islamic Rednecks and it’s 1,500 people,” Atkinson says.

Atkinson is originally from Jackson, Mississippi, and was raised southern Baptist. He converted to Islam 15 years ago and currently works as a chaplain at UNC Hospitals. He says he created a Facebook group of self-described Muslim rednecks to put Islam in a language his family could understand.

“So after years of trying to put these two parts of myself back together – like it’s okay to eat fried collard chicken and collard greens and be Muslim, you don’t have to eat biryani and kebob,” Atkinson says. “I just feel like I’m a red-blooded American that prays funny.”

Atkinson says he feels comfortable practicing his religion in Chapel Hill. After the February shootings, he made himself available to Muslims who wanted to process or talk – but he says the community still needs to know more about the resources available to them.

That was the goal of a recent dinner for Muslim students hosted by UNC Chancellor Carol Folt and Chapel Hill Mayor Mark Kleinschmidt.

During a conversation with UNC senior Sara Khan, Kleinschmidt leaned forward, across the table, to explain what the town can do for her and others.

“You just make it known that you need it and your community will be there. That’s what it’s all about,” he said.

Khan responded that minority organizations may not know that.

“One thing that the MSA (Muslim Student Association) is really trying to do is to teach kids ‘what are your rights?’”

Khan says she wants members of the MSA to share their stories and to know that they can take a visible place in the community.

Outside the university, Muslim leaders are doing just that. They plan to open the town’s first mosque later this year.

This report first appeared on WUNC/North Carolina Public Radio as part of their education coverage. Reema Khrais was the 2014 Fletcher Fellow focused on Education Policy Reporting. The Fletcher Fellowship is a partnership between WUNC and UNC’s School of Journalism and Mass Communication, funded in part by the Fletcher Foundation.