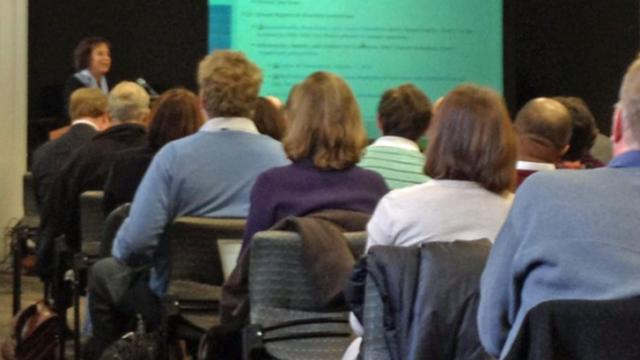 Chapel Hill, N.C. — Carol Folt, chancellor of the University of North Carolina at Chapel Hill, met with her faculty leadership Friday to discuss the recent media reports that have been, in the words of Provost Jim Dean, "a source of pain for the university."

Folt, Dean and others have found themselves on the defensive after a former student-athlete adviser went public with research she says shows Tar Heel student athletes struggle with basic reading skills. UNC officials have called the data misleading and published research of their own showing that most of the athletes met academic standards.

Mary Willingham works in the UNC Center for Student Success and Academic Counseling. From 2003 to 2010, she helped athletes in the Academic Support Program for Student-Athletes. During the course of her work, both as a UNC graduate student and employee, Willingham researched how university admission standards are applied to athletes in the high-profile, revenue-driving sports of men's football and basketball and found that 60 percent of the 183 athletes she studied read at a level more common in elementary school and up to 10 percent had the reading skills of a third grader.

Willingham, saying she was frustrated waiting for the university to act, took her data to CNN, which reported on it last week.

Folt denied Friday that UNC dragged its feet on the data and questioned Willingham's conclusions, claiming that an internal review, using the same formula applied by CNN, shows 90 percent of athletes in revenue sports are "college literate."

"We can't allow things to be said that aren't true," she said. "We did need to look at these data."

On Thursday, the same day the university released the results of its review, officials also revoked Willingham's research privileges. Folt told the faculty council that move was one of policy rather than retribution.

"This process would have to be followed with any researcher's data," she said.

The university has claimed Willingham's suspension stemmed from concerns that it contained and could reveal identifying information about individual students.

Dean made the case that Willingham's research was flawed. "Using this data to determine literacy is a travesty," he told the faculty council. "Claims made based on this dataset are virtually meaningless and grossly unfair to our students."

In his presentation to the faculty, Dean pointed out that Willingham used a tests commonly used for vocabulary to extrapolate reading skills and to coorelate them with a grade level.

Student body President Christy Lambden also went public on the issue Friday. In an open letter, he wrote, "CNN did not do their due diligence and failed to request any data from Carolina. By not portraying the whole picture, CNN misrepresented the entire student-athlete population enrolled at Carolina from 2004 to the present day."

"The Carolina admissions department only admits students that it believes have the ability to succeed at the university," Lambden wrote.