Chancellor apologizes for UNC-CH's past links to slavery 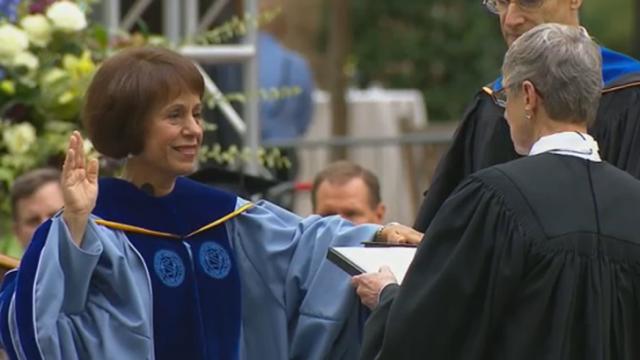 Chapel Hill, N.C. — While honoring the 225th anniversary of the founding of the University of North Carolina at Chapel Hill as the nation's first public university, Chancellor Carol Folt on Friday also offered an apology to the school's historical ties to slavery.

"I offer our university's deepest apology for the profound injustices of slavery and our full acknowledgement of the strength of enslaved people in the face of their suffering and our respect and indebtedness to them," Folt said in her University Day address.

"Our unique legacy demands that we continue to reconcile our past with our present and future and be the diverse and just community that is fitting for America’s first public university," she said. "If done with honesty, resolve and strength of purpose, our choices will help us come to terms with our past, and move us to a better future."

Three years ago, the Board of Trustees voted to rename Saunders Hall, which had been named in 1992 for William Lawrence Saunders, as Carolina Hall. Saunders was an alumnus who served as a colonel in the Civil War and also founded the Ku Klux Klan in the state, and the trustees called it "an error" that he was considered for the honor of having his name on a campus building.

Likewise, advocates are calling on trustees to strip the name of Julian Carr, a major early donor to UNC-Chapel Hill who also was a white supremacist, from a building on campus. But when they renamed Saunders Hall, trustees put a 16-year moratorium on renaming other buildings.

The largest controversy involving UNC-Chapel Hill's racial history has involved the fight over a Confederate monument on McCorkle Place, the heart of the campus. Critics called the "Silent Sam" statue honoring alumni who fought and died for the Confederacy during the Civil War a racist symbol, and it was toppled from its pedestal during an August protest.

The UNC Board of Governors has given Folt's administration and trustees until Nov. 15 to devise a plan for Silent Sam's future. Thousands of UNC-Chapel Hill students, faculty and alumni have lobbied that the statue not return to its pedestal, while monument supporters insist the university has no power to remove it and must return it to McCorkle Place.

"Our apology must lead to purposeful action, and it has to build upon the great efforts and sacrifices of so many across the years who fought so hard for much of what we value about Carolina today," Folt said.

History professor James Leloudis, co-chairman of the Chancellor’s Task Force of UNC-Chapel Hill’s History, detailed the university’s efforts to install signs and educational markers in McCorkle Place to put the school past ties to slavery in context.

Signs and markers will be placed at the quad entrances to mark the birthplace of American public higher education and acknowledge the indigenous people who "were the first stewards of this land, and whose descendants work, study and teach here today," Leloudis said.

A marker near the Unsung Founders Memorial "will express the university’s deep contrition for its role in the injustices of slavery and invite visitors to join us in researching and recovering the full humanity of the enslaved men and women who built so much of the early university and sustained it, he said, adding that repair and renovation of the memorial "will create a more respectful, contemplative space."

Once a plan for Silent Sam's future has been approved, he said, extensive research already conducted will help "inform an exhibit and other educational materials to teach the history of the monument and the era of white supremacy in which it was erected."