Raleigh, N.C. — Jim White stares at the large tree trunk lying in his Raleigh front yard and thinks about how it got there. “Well, Michael came and our big oak fell,” White says.

Michael, in this case, is Hurricane Michael, which hit the Triangle area in October of 2018.

The tree fell across Carroll Drive near Five Points, blocking the entire street for three days. 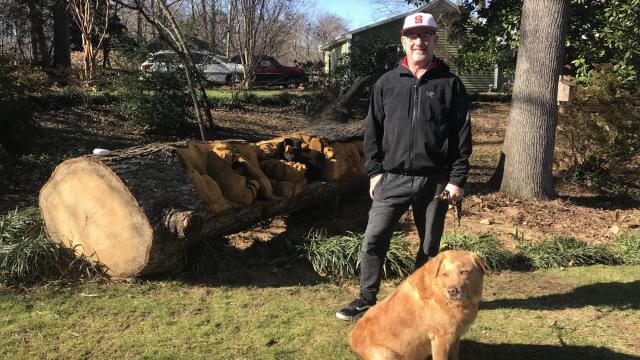 “It surprised the heck out of us,” White said this week, “It was our favorite. It was massive.”

City crews cut and hauled off what was blocking the road, leaving White with the large tree trunk. “It's, like, what are we going to do now?” White thought at the time, “Our whole yard is going to change.”

The comfortable shade provided by the big tree now gone, White considered other options for the space and the wood left behind. A friend suggested he carve the tree trunk similar to a downed tree turned art in Umstead Park.

“He just attacks it," White said. "He doesn't draw anything. He just whittles away. 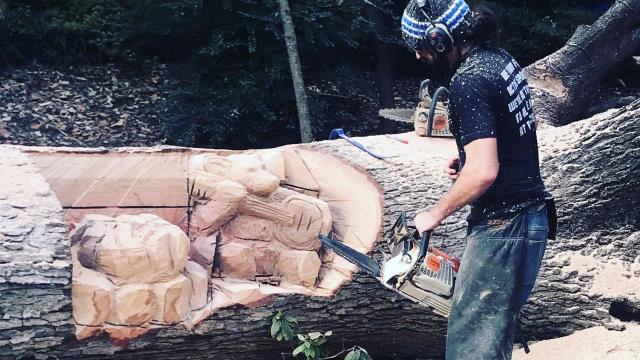 Corey Lancaster owns Boon Hill Gallery near Princeton in Johnston County. He does this sort of on-site carving more often than you might think.

“I probably do 20-25 a year depending on how bad storms are,” he said while working in his studio.

Lancaster is a prize-winning artist who travels the country doing this kind of work. “Seeing the people's reaction to what was in my head, I try to translate that into something they can enjoy and it's worked out every time so far,” he said. 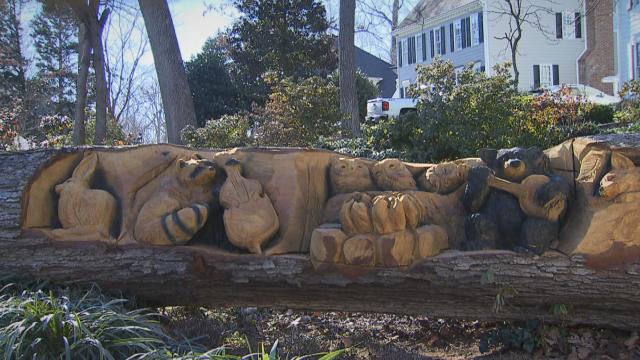 “I love it. I think it's just fabulous. I love it!” she said Monday, stopping to admire the art. “What a wonderful way to use this natural beauty here.”

Stark's reaction is exactly what Jim White was hoping for.

“It's going to be something that everyone in the neighborhood can enjoy for a long, long time,” he said. His goal was simple: “Basically just to make people happy.”