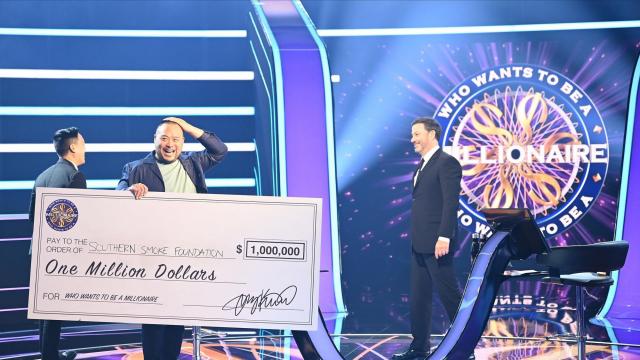 CNN — David Chang just became the first celebrity to win the top prize in "Who Wants to Be a Millionaire?"

And the chef decided to give it all to a good cause -- he's donating the entire $1 million prize to restaurant workers who have been impacted by the pandemic.

In the nail-biting final moments of the episode Sunday, host Jimmy Kimmel watched as the Momofuku founder struggled over the last question.

"No (celebrity) has ever gone for it," Kimmel said. "They've all walked away."

For his final question, Chang was asked to name the first US president to have electricity in the White House.

"This is the most painful, nervous -- this is terrifying," Chang can be heard saying in a clip from the episode.

After phoning a friend -- ESPN journalist Mina Kimes -- Chang guessed President Benjamin Harrison, despite admittedly not even knowing whether Harrison was a president.

The sound of screams and a gentleman with a gigantic check had Chang jumping from his chair. He had won.

Chang had always intended on donating the money to the Southern Smoke Foundation, a crisis relief organization for people in the food and beverage industry. If Chang had decided not to answer the question, he would have walked away with roughly $500,000. Instead, he decided to risk it all for the sake of doubling that donation.

"Having a million dollars right now in this moment, is a game changer for many, many families," Chang says in the video clip of the episode. "And yes, half a million is as well -- and I want to say 'No, just take the money!' -- but I'm not."

While restaurants and bars were classified by states as essential businesses that could operate on takeout and delivery, many still had to close down during stay-at-home orders. Some businesses found it hard, or economically unfeasible to adopt that model, or had other public health concerns.

The Southern Smoke Foundation, started in 2015 by chef Chris Shepherd, has distributed $4,097,425 to 2,071 people nationwide, according to its website. "To date, Southern Smoke has distributed more than $5.7 million, both directly to people in need via the Emergency Relief Fund and to organizations that represent the needs of people in our industry," the organization says on its website.

The organization tweeted the news of Chang's win, exclaiming "WE WON A MILLION DOLLARS!"

"I'm so honored that Dave chose Southern Smoke as his charity," Shepherd told CNN. "Now, more than ever, with indoor dining shut down in many parts of the country and temperatures dropping to prohibit outdoor dining, food and beverage industry employees are desperate."