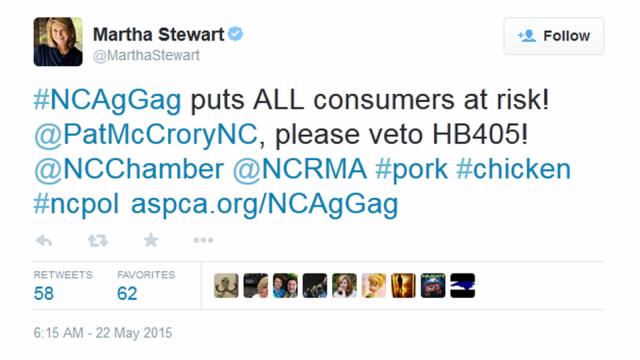 Raleigh, N.C. — The fight over undercover investigations at farms and other North Carolina businesses has gone Hollywood, with celebrities from Martha Stewart to Kesha urging Gov. Pat McCrory to veto legislation sitting on his desk.

State lawmakers this week passed House Bill 405, dubbed the "Property Protection Act." The bill would allow a business or property owner to seek damages against any employee who intentionally enters an unauthorized area of that business or property to record video or sound.

Backers of the proposal say it will protect business owners from rivals or activist groups that may send in members to be hired and work undercover with the intent of stealing information or exposing workplace practices.

Animal rights organizations call it an "ag-gag" bill, arguing that it is targeted at stopping undercover operations at agriculture facilities such as poultry farms. Several such operations in North Carolina in recent years have produced video of workers abusing birds.

The final version of the legislation isn't limited to agriculture, however. It would apply to any employee in any place of business.

McCrory has until May 30 to act on the bill. Unless he vetoes it, it will become law with or without his signature.

A Twitter campaign calling for a veto has picked up steam in recent days, with domestic diva Stewart, singer Kesha, actress Andie McDowell, "Will & Grace" star Eric McCormack, race car driver Leilani Munter, and others lending their names to the cause.

URGENT! @PatMcCroryNC deciding NOW if he will veto #NCAgGag bill, please tell him to VETO and not protect abusers! https://t.co/d46GhgQsId

There was no word from McCrory's office his plans for handling the bill.