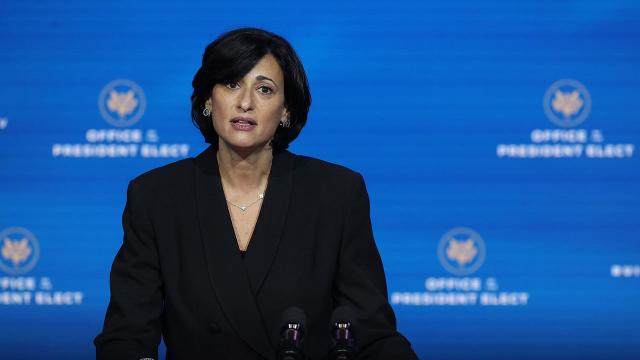 CNN — Covid-19 vaccinations will not only help stop the virus from spreading, they will also hamper the coronavirus' ability to mutate into new variants, Dr. Anthony Fauci said on Thursday.

"Viruses don't mutate unless they replicate," Fauci, the director of the National Institute of Allergy and Infectious Diseases, said at a news briefing at the White House, his first under the administration of President Joe Biden.

"And if you can suppress that by a very good vaccine campaign, then you could actually avoid this deleterious effect that you might get from the mutations," Fauci said.

Fauci's remarks come as scientists around the world attempt to decipher what the new variants may mean for those who've been vaccinated or have antibodies to the virus.

While a few recent studies suggest that a variant first detected in South Africa may be a problem, even for people who have been vaccinated, at least one recent study found evidence that people vaccinated against coronavirus will be protected against new variants.

'A constant pattern of basically running out' of vaccine

For a second time, more than a million vaccine shots were given in a single day, the Centers for Disease Control and Prevention announced on Thursday.

More than 17.5 million vaccine doses had been administered in the US, and almost 2.4 million Americans have been fully vaccinated, according to the CDC.

And the push to get people vaccinated has grown even as officials work to meet demand with limited supply.

"Demand for the vaccine will be much greater than the supply for some time," Iowa Gov. Kim Reynolds said in a Thursday news conference.

She said her state is 46th nationally in the amount of doses allocated, with just 19,500 doses each week, though the state is ranked 15th for administering the vaccine. She's not sure why the state is receiving few doses but hopes that Iowa will be allocated more doses in the coming weeks, perhaps by the first week of February.

"We are doing a lot with relatively little vaccine," Reynolds said.

New York Gov. Andrew Cuomo said the state is administering about 65,000 doses a day -- a rate that will deplete its current supply in two or three days. "What's clear now is that we will be going from week to week and you will see a constant pattern of basically running out, waiting for the next week's allocation and then starting up again," Cuomo said.

The state will receive 250,400 doses next week, but Cuomo urged President Biden to increase the supply to states immediately.

"At this current rate of supply, it takes seven and a half months to get enough vaccine for the currently eligible population," Cuomo said.

"At the end of the day, vaccine supplies are limited, so while we continue to ask the federal government for more vaccines and faster, we have to keep working together to stop the spread today," Evers said, "by continuing to wear our masks, staying home whenever we can, avoiding gatherings, and doubling down on our efforts to keep our friends, neighbors, and families safe."

Biden: US Death toll likely to top half a million in February

The Covid-19 death toll in the US will likely top 500,000 next month, President Biden said in a news conference Thursday, as he portrayed his administration's plan to respond to the pandemic as a "wartime undertaking."

Part of that plan involves asking Americans to wear masks for the first 100 days of his administration -- a step that could save thousands of lives, he said -- as it works to improve the vaccine rollout.

"The masks have become a partisan issue, unfortunately," Biden said, "but it's a patriotic act."

"The fact is they're the single best thing we can do," he said. "If we do this as Americans, the experts say by wearing a mask from now until April, we'd save more than 50,000 lives."

More than 408,000 Americans have died of Covid-19 as of Thursday afternoon, according to data from Johns Hopkins University. More than 62,000 deaths have been recorded this month, making January 2021 the second deadliest month of the pandemic, behind December 2020.

Biden's warning of tens of thousands more deaths in just a few weeks echoes the latest ensemble forecast by the CDC, which projects the death toll could reach up to 508,000 by February 13.

Biden's remarks came on his first full day in office, which marked one year since the first patient with Covid-19 was identified in the US. That number has since ballooned to more than 24.5 million as of Thursday, according to Johns Hopkins.

The President signed a series of executive orders to address the crisis on several fronts, including setting up a pandemic testing board.

"Let me be clear: Things are going to get worse before they get better," Biden said, adding that a memorial he held for Covid-19 victims this week will not be the last.

"But let me be equally clear: We will get through this. We will defeat this pandemic," he said.

There remain significant challenges with vaccine supply across the country, according to state officials. And sources tell CNN that Biden and his advisers are inheriting no coronavirus vaccine distribution plan from the outgoing Trump administration.

Fauci, Biden's chief medical adviser, said the United States can reach the President's goal of 100 million shots in 100 days -- and may even be able to surpass it."

"The President has made this his top priority," Fauci told ABC's "Good Morning America," adding he was set to meet with Biden later Thursday to brief him on Covid-19 and vaccine distribution.

"As he says, he's going to do everything that he needs to do to make sure we have a successful rollout of the vaccines, get it into people's arms and get as many people vaccinated as we possibly can," Fauci said.

Connecticut Gov. Ned Lamont said he believes there is a "real chance" that vaccine production could double by the end of February and double again by the end of March if President Biden uses to Defense Production Act to "jumpstart" production. Lamont was recently named a co-chair for the National Governors Association's Pandemic and Disaster Response Task Force.

But in the meantime, "right now, I think we still have vaccine on the shelves that we need to get into people," she said. Federal officials are looking at a "diverse" rollout plan, she said, involving community vaccination centers, stadiums and mobile units to get vaccines to everyone across the country.

Biden also announced the US would rejoin the World Health Organization, a move Fauci said was important for an effective global response.

"The official announcement that we are rejoining, we're going to live up to our financial commitments and a whole bunch of other things, it was really a very good day," Fauci said. "The response I'm getting from my colleagues all over the world is really very, very refreshing."

While the US is far from out of the woods, CNN analysis of Johns Hopkins data shows slight dips in new daily cases.

New cases are down 21% compared to last week, the largest week-over-week drop since the pandemic began. As of Wednesday the average number of new cases over the last seven days remained high, at 194,252 -- but that marked a dip below the 200,000 per day average the country has consistently seen for weeks.

As of Thursday morning, 43 states were reporting decreases in new Covid-19 cases greater than 10% compared to last week, according to CNN's analysis.

And according to data from the COVID Tracking Project, the US has a 9.81% positivity rate over the last seven days, dropping below the 10% threshold for the first time since late November.