Wake Forest, N.C. — Firefighters in Wake Forest were trying to determine what sparked a blaze that broke out a home Tuesday afternoon, authorities said.

Bill Crabtree, a town spokesman, said the fire was reported around 3 p.m. at a two-story house in the 7400 block of Oriole Court. Authorities at the scene said no one was home at the time the fire occurred.

Crabtree said up to 40 firefighters from four different departments responded to the blaze. Three cats and two dogs made it out safe, according to Barrett.

Firefighters used foam to help cool the burning structures, and the roof of the home collapsed as crews battled the fire. 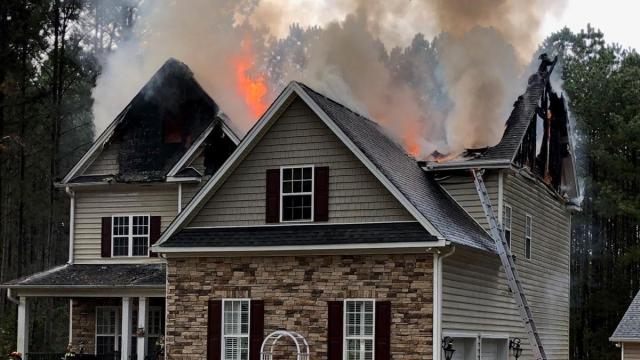 Video from Sky 5 showed intense flames and plumes of black smoke rising from the home as firefighters worked to control and extinguish the blaze.

Barrett said there were no fire hydrants in the upscale neighborhood, so firefighters had to transport water to the area using "drop tanks."