Raleigh, N.C. — The owner of a Raleigh gun shop shared surveillance video of the moments that his gun store was broken into.

Mike Tilley, who owns the Personal Defense and Handgun Safety Center at 301 Tryon Road in Raleigh, said the break-in occurred Wednesday around 10:15 p.m.

Due to the many safety precautions within the store, the invaders were not able to steal any guns, police said.

The video shows at least three thieves wearing all black jumping through a window they smashed above the door. From the pictures shared by the owner, it appears they used a ladder to access the high window.

In an email to WRAL News, Tilley wrote the incident was "so sad" and "senseless destruction and violence of a family-owned business that has served the diverse and communities around us for over 20 years."

Tilley said the gun shop has been open every day during the pandemic providing curbside service to customers. 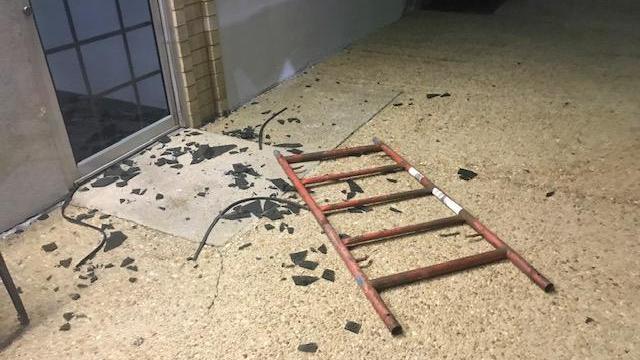 Tilley said about 25 officers responded the scene to look for fingerprints. No arrests were announced.

His store reopened Thursday at 10 a.m.

While reporting from outside the store before 4:30 a.m., WRAL's reporter and photographer had an encounter with police.

Nia Harden and Vinnie Boccanfuso were seated inside a vehicle when a police car pulled up. Boccanfuso got out to identify himself as a member of the media. He yelled his name and his affiliation with WRAL, but an officer told him to return to the car. He then ordered Boccanfuso and Harden to put their hands on the car.

At that point, more squad cars arrived, and officers ordered the pair to walk towards them with hands up. When Boccanfuso got close enough, officers patted him down, accepted his explanation and apologized for any confusion.