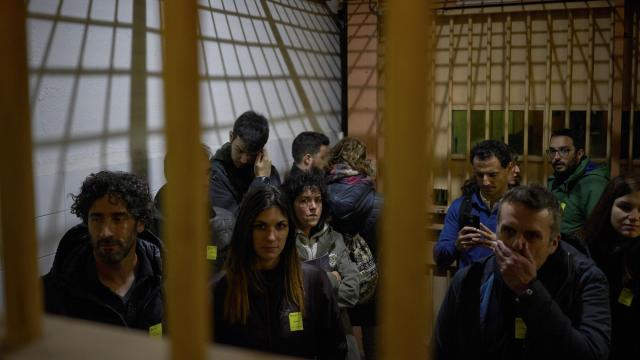 BARCELONA, Spain — Catalonia is no stranger to political strife. The Spanish government’s clampdown on the northeastern region’s independence drive is only the latest conflict to visit Catalans.

And if there is one place where the archaeology of those many conflicts can be uncovered, it is in the cells of the Modelo, a century-old prison in the heart of Barcelona, Catalonia’s capital.

The Catalan authorities closed the prison in June, but as the most recent political conflict intensified, they have been highlighting its history.

After the Modelo was emptied of its last prisoners, it was host to an exhibition curated by Agustí Alcoberro, a historian who is also one of the main separatist leaders of Catalonia.

The exhibition attracted over 80,000 visitors between July and the end of November, when it closed. But it also received some severe criticism for its attention to famous prisoners who fit Catalonia’s history of separatism and social upheaval, rather than others.

“Overall, its account is grotesque, tendentious and regrettable,” wrote Francesc Valls, a journalist, in the newspaper El País.

Alcoberro himself entered the Modelo as a 16-year-old activist in 1975, by which time he had already joined a clandestine separatist group. He was released at the end of that year, a month after the death of Spain’s dictator, Gen. Francisco Franco, and later benefited from Spain’s political amnesty law of 1977.

“It’s worth remembering that Spain is a country where neither Franco nor any other leader has ever admitted to having political prisoners,” he said.

Such comparisons have rankled Spain’s government and most mainstream parties, who insist that the 20 Catalan separatist politicians accused of rebellion — some of whom have been remanded in custody — are being prosecuted for violations of Spain’s Constitution.

Long before Carles Puigdemont and other separatist leaders sought to secede from Spain in recent months, Catalonia played a central and often turbulent part in Spanish politics.

Much of this history of political upheaval led to the cells of the Modelo, which has been “the mirror of the social and political conflicts of Catalonia in the 20th century,” said Joan B. Culla, a Catalan historian.

While several generations of activists and politicians were imprisoned for their beliefs, the Modelo was also sometimes their safe haven, protecting them from the greater violence outside, particularly during the Spanish Civil War, Culla said.

Opened in 1904 on a plot of land that was at the time on the outskirts of Barcelona, the Modelo was designed to be just that: a model center for preventive detention. Each of its 800 prisoners was meant to have his own cell within an asterisk-shaped building with a circular center, allowing guards to see all the way down each wing from a central surveillance post.

But Barcelona’s rapid expansion left the Modelo occupying two blocks of a residential district. As the city turned into a hotbed of political and labor conflicts, the Modelo overflowed with inmates, from violent criminals to trade unionists, anarchists, communists and revolutionary intellectuals.

During the Civil War of the 1930s, the Modelo received over 13,000 inmates. Many were supporters of Franco’s 1936 military coup, which failed in Barcelona and Madrid, even as Franco’s soldiers made rapid headway in other parts of Spain.

When Franco finally won the war three years later, some of his Modelo supporters became important figures in his regime.

Among them was Santiago Udina Martorell, a politician who helped oversee Barcelona’s economic development in the 1960s.

Another right-wing politician, Josep Maria de Porcioles, was also detained in the Modelo before the war. He became Barcelona’s longest-serving mayor under Franco.

Franco replenished the Modelo with his own political opponents, as well as with gays and some artists whose work contravened the Catholic dogma of his regime.

In a curious twist, the prison’s own chaplain commissioned Helios Gómez Rodríguez, an anarchist painter and poet, to turn his cell into a chapel, with a painted fresco of a Gypsy Virgin surrounded by black angels. (Most of the fresco was later whitewashed.)

Cell No. 443 was that of Salvador Puig Antich, the last political activist executed by Franco’s regime, in March 1974. He was garroted in a room where parcels were delivered to the prison.

As soon as Franco died, the Modelo was seen as unworthy of a new Spain, an unwanted symbol of a crowded and unhealthy prison system that Spain’s restored democracy promised to overhaul.

A proposal to close the prison was made in 1977, two years after Franco’s death, by Spain’s prime minister at the time, Adolfo Suárez. The Modelo by then had become the scene of major revolts, exacerbated by widespread heroin use among inmates.

However, it took another 40 years for politicians to fulfill pledges to close the Modelo. In June, the Catalan authorities transferred the last inmates to other penitentiaries.

Next month, Barcelona’s city government is set to take over the premises. Nearly 5 million euros ($5.87 million) have been earmarked to transform the Modelo into housing units, as well as a public park and a new historical memorial.

The project could take years — and perhaps spark a new round of controversy.

Joan Queralt, a professor of criminal law at the University of Barcelona, said he hoped the memorial would be designed as “a museum denouncing the kind of prisons that we’ve kept going for so long, marked by poverty and violence, rather than only about Catalan political resistance.” For now, the closing of the Modelo requires the relocation of about 550 staff members to other Catalan prisons.

In an upstairs gallery, a group of cleaners on their morning break said they worried about finding another job because, unlike most other workers, they were hired by an outside contractor.

Since the last inmates left in June, a dozen cleaners have been sweeping empty cells, which means “less work but also less satisfaction,” said Shirley Chávez, a cleaner.

“It might sound weird, but I felt more useful when I was sometimes wiping away blood and vomit,” she said.