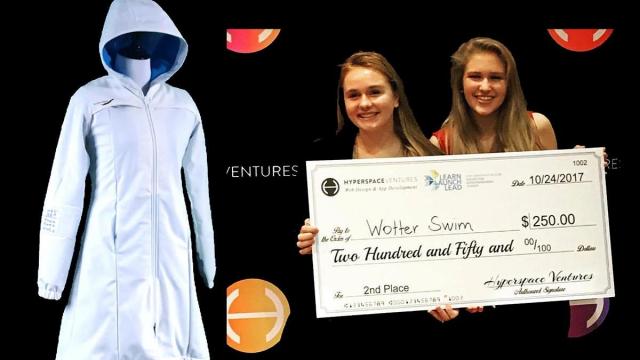 With an online fundraising campaign, two local high school girls and competitive swimmers are drumming up support for what they're calling the first-ever swim parka for female swimmers. Already they've won support from three Olympic athletes.

Niki Vilas Boas and Becca Segal are co-founders of the company called Wotter. They are Cary Academy students and competitive swimmers at Triangle Aquatic Center.

The Wotter Swim Parka is designed to better accommodate female swimmers when compared to the bulky, unisex coats on today's market. The coats are worn between events or after practice as an out-of-pool cover up and for warmth.

The Wotter parka includes an oversized hood for ponytails and top knots, female styling, enlarged zipper pulls and a quick "wrap and snap" storage feature. The parkas will retail for $139 once they are available, which is expected to be late summer 2018.

“Currently, girls are twice as likely as boys to leave the sport of swimming by the time they graduate high school. As swimmers, we believe some of this stems from the vulnerable nature of swimming," Niki said in a press release. "There is a failure to validate girls with gear that makes them feel confident AND comfortable on deck and in the water, and if we can offer that, we can have a real impact.”

Added Becca: “Today, only one in four competitive swim coaches are female. This is a major problem because young women aren’t seeing enough role models like them on deck. We are passionate about building a brand that gives female swimmers a platform where they can celebrate themselves and each other! We know that if we can give girls like us that voice, we’ll keep more girls in the sport for a lifetime.”

The teens say swimming has been a big part of their development and want to ensure the sport appeals to girls going forward. Building a line of gear that reinforces girl empowerment and individual expression is one way to make that happen, they say.

Kara Lynn Joyce, Olympic swimmer, who competed in 2004, 2008 and 2012, and Annamay Pierse, Olympic swimmer and former world record holder, have tweeted their support in recent weeks. JR deSouza, an Olympian and two time world record breaker, also is supporting their efforts. The girls also came in second place, winning $250, in the NextGen Pitch Contest at Cary Academy in October.

There are things I love: Supporting females, Swimming, & on while on deck it's swim parkas. These amazing young women are trying to get a parka designed especially for females off the ground, I couldn't not support them!! @swimswam https://t.co/3KGQpNUxgg https://t.co/tEdp6YaIJe

The online KickStarter campaign runs through Jan. 28. At last check, the teens have raised more than $9,600 toward their $36,000 goal. Backers, depending on how much they donate, will get a reward, including a parka, once they are available.

Looking forward to sharing more about these incredible girls and their venture!