Cary, N.C. — Wake County plans to consolidate its emergency response services under one entity, to be called Wake County Department of EMS. The process should be complete by May 4.

The county claims absorbing the two smaller organizations will save taxpayers money as well as add efficiency to the administrative process. Plans to consolidate the services have been talked about for years, but the county just recently decided to terminate both contracts with 60 days notice.

“It's a simple matter of efficiency,” said Jeff Hammerstein, assistant chief of Wake County EMS. “By removing some redundant layers of administration, we're able to be more agile and respond to the needs of the community more quickly and easily.”

Others in the EMS community don't see it that way. They feel it's a heavy-handed takeover that ignores months left on their contracts and allows little time for employees of the organizations to adjust.

“It doesn't make sense to me,” said Cary Area EMS Capt. Justine Hollingshead. “We have been above board, transparent, professional. We can't say the same from all sides that have been involved in the situation.”

Hollingshead has been with Cary Area EMS for 25 years. She believes the organization provides an efficient and cost-saving service.

“We're on the side to say that it will cost the taxpayers more in the long run” to merge, Hollingshead said.

Wake claims the move will save $150,000. Hollingshead says, even if that is true, “It's almost laughable, considering the totality of the Wake County budget overall, and all the things that that Wake County does.”

No jobs will be cut in the merger. Wake County is offering to hire all EMTs and paramedics from both organizations, as long as they are eligible to work for the county.

It's unclear how many will take that deal. There is a nationwide shortage of EMS providers, so some may choose another county EMS or hospital work. 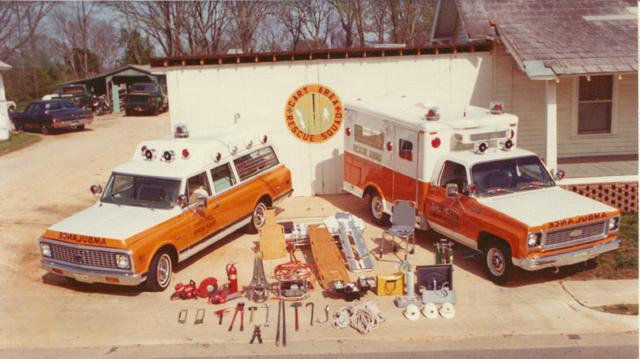 Cary Area EMS to cease to exist before 50th anniversary

Cary Area EMS is set to celebrate a half-century of service. The organization was formed in 1971 after a 4-year-old child was hit by a truck and died while waiting 45 minutes for an ambulance to come from Raleigh.

Hollingshead says the Cary organization is much more than an EMS service. It's part of the community, participating in community events, sponsoring things such as flu clinics and first aid education.

While Cary's iconic orange and white ambulances will go away, Hamerstein with Wake County says the level of service will be the same.

“This consolidation doesn't change service, it doesn't change the EMS response,” he said. “The look of the ambulance. That's what will be different.” ​