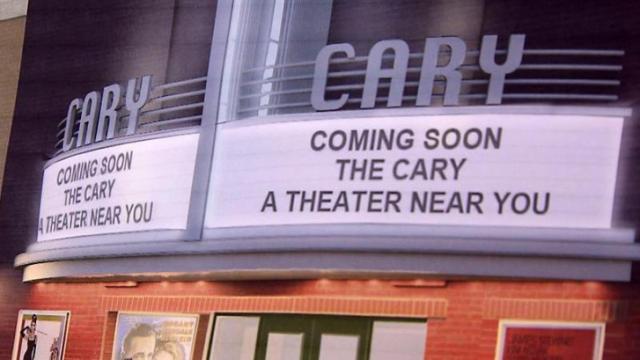 The 7,000-square-foot downtown building, at 122 E. Chatham St., has been home to a clothing store, auto parts shop and recording studio since The Cary theater closed in the late 1950s.

"This is an important piece of Cary's past and we're bringing it to the future," said Mayor Harold Weinbrecht.

Betty Ann Chandler Atkins remembers when her father, Paul Chandler, built The Cary in the late 1940s. She said it was a childhood playground for her and her siblings.

"It seems smaller to me (now) than it did when I was a child," Atkins said.

Now, a new generation of the Chandler family will be able to enjoy the theater.

"I got to bring my grandchildren (to the groundbreaking) today, and they saw what their great-granddaddy did," Atkins said. "They didn't know him at all. My children didn't know him."

In July 2011, the town purchased the property and began working on plans to expand it into a multi-use cultural facility. The theater's original doors and seats will be incorporated into a historical display and a three-story support building will be built adjacent to the theater for commercial and community use.

"It's going to reinvent, re-energize and revitalize downtown," Weinbrecht said. "It's going to be an exciting place to be, a destination point."

The theater is scheduled to open by the end of 2013.