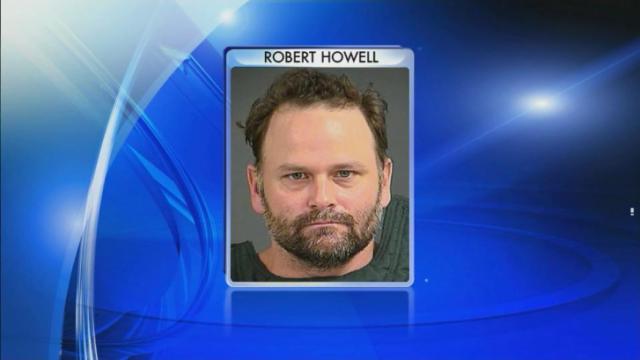 Cary, N.C. — A 39-year-old Cary man, who has worked as a tax attorney in Raleigh, is accused of holding his ex-girlfriend hostage at a South Carolina grocery store.

The Isle of Palms Police Department has charged Robert Howell with attempted murder, kidnapping and first-degree burglary in the incident, which happened Wednesday.

Investigators said Robert Howell followed Autumn Yee, 29, of Cary, to Isle of Palms, where she was vacationing. Howell allegedly took Yee to Hudson's Market, where she alerted one of the clerks by silently mouthing "call police."

In a 911 recording, the woman can be heard speaking to an emergency operator about the situation.

"I need you to come to Wild Dunes, please. There's a man with a gun and he's holding me hostage," she said. "I need you to get here quick."

Isle of Palms police Capt. Kimberly Usry said Yee tried to keep herself and her assailant in public places so someone could see them. At some point, she jumped over the counter to try to get away. Howell grabbed her, ran out of the store toward the beach and was arrested, Usry said.

Police said Yee, who suffered minor scratches in the incident, had gone to Isle of Palms to flee from Howell a day after he allegedly assaulted and threatened her in her Cary home.

"Officers responded and found that a subject and been harassing the victim there," Cary police Capt. Randall Rhyne said.

In a 911 call that day, Yee told dispatchers she arrived home and found him pacing back and forth in the road, staring at her. She said she was frightened and asked the call-taker to stay on the line until help arrived.

"I'm just afraid to get out of the car," she said in the recording released Monday. "I just want a cop to escort me to my door and ask him to leave."

Robert Howell and his estranged wife, Sarah Howell, are locked in a contentious custody battle over their three children. According to court documents, Sarah Howell had subpoenaed Yee in the custody case.

A day after Yee was held hostage, Sarah Howell sought a protective custody order against her husband, citing the kidnapping as proof that he posed a danger to her and her children.

"We take domestic violence very seriously," Rhyne said. "We have a pro-arrest policy for these type of offenses. We try to get them adjudicated to the full extent of the law."

Bo Demster, a managing partner at Poynter & Spurill in Raleigh, confirmed that Howell worked as a tax attorney at the firm from 2013 until this April. The terms of his departure were not disclosed.

"This was a real surprise to all of us who have worked with him," Demster said of Howell's arrest.