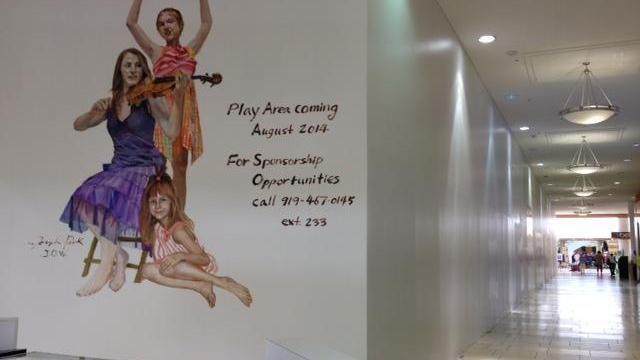 If you've been to Cary Towne Center recently, you might have noticed the giant box that surrounds the area next to Belk and Dave & Busters.

"This is a big deal for us," said Josh Harmon, the center's general manager. "We feel like the demographic in this market makes it one of the best for this."

The new play area replaces the tired and tiny piece that sat next to Sears and the carousel, but has since been removed. Harmon said the play area will feature soft pieces, similar to what you find at other malls. It will be surrounded by soft benches for parents and caregivers to sit and for kids to (theoretically) rest.

Plans also call for a small area with tables and a handful of kiosks where snacks and other items might be for sale.

Mall officials are finalizing a deal for the playground's sponsorship. Harmon said the playground will have an art and music theme.

The space features about a dozen skylights, giving the area on the inside the mall some natural light. The play area will be designed generally for kids 5 and under.

PlayTime, a leading provider of indoor and outdoor play areas, is installing the pieces.

"This is one of the biggest and most exciting play areas that they have ever built," Harmon said.

Right now, the projected grand opening is Aug. 23. Harmon said he hopes it becomes a gathering place for kids and their parents.

"We want to create a casual common area in the mall," he said. "... We are excited about it and we really believe this will be a great amenity."

In other mall news: Look out for updates to the play area at Triangle Town Center in Raleigh as well. It will shut down July 31 and reopen a couple of weeks later.